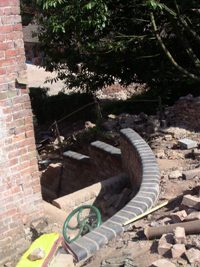 While the regular jobs were in hand, we decided to check out the wooden teeth in the gear wheels. There was only a small team today enjoying weather that was more like high summer than mid April.

Martyn, John and Richard arrived before ten o’clock and quickly decided on tasks. John, of course, got on with bricklaying, capping the wall around the corner of the mill. This picture was taken towards the end of the day and shows off the donated coping bricks nicely.

Martyn decided to take advantage of the break in the waterwheel restoration to work through a gap in the buckets on the end wall of the wheel pit. We are fairly sure that an earlier waterwheel was breast shot, with water arriving half way up the wheel and flowing underneath. The stonework for this arrangement is still in place but the channel has been filled in. Some of the infill has eroded and become unstable and Martyn spent the morning filling in the gaps with tufa stone and re-pointing the remaining stonework. 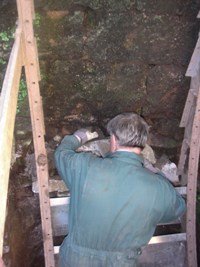 You can see from the second picture how confined the working space was but you can’t see that Martyn was standing in surprisingly cold water, a fact he made sure John and Richard were aware of!

Richard, as ever, mixed mortar for the other two and cleaned up the last few of the coping bricks.

Colin and Headley arrived shortly after midday with more back plates for the waterwheel, having spent the morning in Colin’s workshop drilling all the bolt-holes. Their arrival was the excuse for stopping for lunch, after which they set about removing more of the corroded buckets from the wheel.

Martyn and Richard moved inside the mill and had a close look at the wooden teeth on the gear wheels. It was always obvious that these had been attacked by woodworm but we had never checked to see how badly they were affected or what was involved in restoration or replacement.

It turns out that each tooth is set in a slightly tapered socket and secured with a single nail. Once the nail is removed the tooth can be extracted easily. Close examination suggests that they are not going to be difficult to make but we are going to have to replace every single one. The woodworm have eaten away most of the inside of most of the teeth even though the outside doesn’t look too bad. The main gear that drives the stones has sixty four teeth, so we are going to need quite a lot of suitable wood. 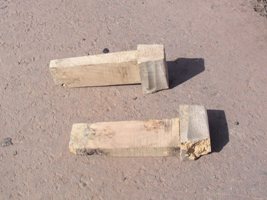 Traditionally the wooden teeth for these gears are made from apple wood. We are not sure if this is because it is the best wood for the job or just that it was readily available and okay for the job. While we are investigating this we would love to hear from anyone who could supply us with apple wood. You can get in touch via the Shelsley Walsh office or by clicking here. The last photo shows two of the main gear teeth. They are about twelve inches long, four inches wide and two and a half inches thick. That adds up to quite a lot of wood!

Read about the wooden teeth? Click here to see the previous article.