The team met today and made a start on installing the first hardwood window above the waterwheel as well as making progress with other ongoing tasks. 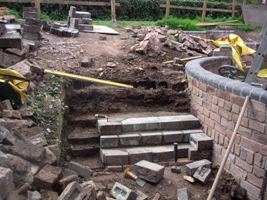 The team consisted of Martyn, Colin, John and Richard with Headley joining us just before lunch. John Stinton, the local builder, had erected some scaffolding over the waterwheel since the last working day. This gave Martyn and Colin safe access to be able to fit the window frame.

As a change from building walls John made a start on the brick steps that will run down past the waterwheel. There will be a series of small flights with level (roughly level anyway) paths in between to get down from the return road level to the farmyard level. Each step is being built with a concrete block core then faced with blue engineering bricks. Many of these bricks have a grey mortar sticking to them and John Stinton tells us this is made with pulverised furnace ash or PFA. Richard has cleaned some of these bricks and decided that PFA stands for pretty ‘ard. He will leave the F to your imagination. Mixing mortar for John and Martyn was the easier option for once. 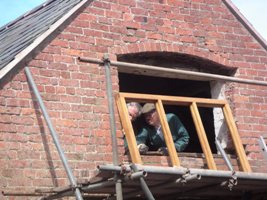 Once Headley had arrived Colin left Martyn pointing up around the hardwood window frame and got on with installing more of the new plates into the waterwheel. In the course of the afternoon they managed to get two more plates in place. The first of the two had to be inserted with an overlap beneath one of the original plates which was an added complication. Each plate fitted brings us a step closer to having a workable waterwheel.

By the end of the day the hardwood window frame was firmly in place ready to be glazed. The photograph was taken much earlier in the day but does give a good view of the frame and its location. At this stage John Stinton was putting the finishing touches to the scaffolding, so all the work was being done from inside the mill.