We made a start on replacing window frames on April 17th. The above average temperatures continue and the team of Martyn, Colin, John, Headley and Richard was joined by Drene, Colin’s wife, who likes to paint. 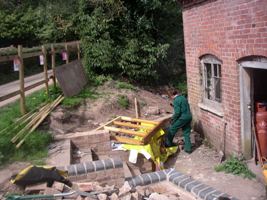 Drene’s task for the day was to stain the new frames before they are installed. She is applying two coats of Sadolin stain on both the window frames that we have and the picture shows the first coat going on. Once the frames are stained we are hoping to have some scaffolding erected to help install them. Much of the work can done from inside the mill but the final glazing of the frames will have to be done from outside. The window above the waterwheel will be particularly difficult to reach with just a ladder.

The rest of the team divided up to their regular tasks with the exception of Martyn who had the sad job of returning the baby JCB to its rightful owner. This machine has been extremely useful in the months that we have had it on site and there have been several jobs that would not have been done if we had had to do the digging by hand. We are very grateful for the loan.

Colin and Headley carried on with the removal and replacement of the waterwheel buckets and back plates. Several times during the day we all had to join forces to turn the wheel to a new position. With some buckets in place the wheel is completely unbalanced and it takes two or three people hanging on one side to get it to turn while a fourth person, usually Richard, gets ready with a baulk of timber to prop it in a new position. We have done this many times before but we were minding our language today with Drene just around the corner!

John laid yet more of the coping bricks, finishing off the top of the front wall. The load that was donated is enough to cap the whole wall from the front steps around the side of the mill past the waterwheel. Most of the bricks were double ended and Richard and John have cleaned all the old mortar off these between them. There are still a few single ended bricks still to be cleaned up, but there are plenty for John to carry on with.

Up at the mill pool the Court House team have discovered that the wall between the pool and the house doesn’t have any foundations. This wall formed the boundary between the formal gardens of the Court House and the main pool and used to have some rather ugly stone decoration on top, probably hidden by plants. The team are considering their options but are probably going to remove the existing brickwork, dig proper footings and then rebuild. They still want to have the pool filled by the first hill-climb, but we will wait and see. For similar reasons we would like to get the new window frames in place by then, as well.

read about the window frames? Click here to see the previous article.