We made a start on bringing the old winnower back to working order this week. At some time in its life it has lost some height, so our first job was to extend the legs to bring it back up to a workable level. 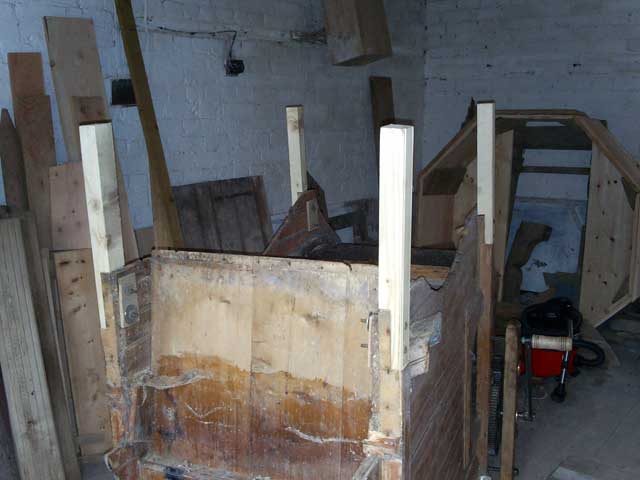 We turned the machine onto its back to make it easier to work on shaping the original legs.

The four extensions were shaped to match the original beading and then halving joints were cut into the old and the new sections.

A pair of coachbolts through each joint and the job was done. It sounds easy now it is written down, but it took  Richard and Colin most of Tuesday and Thursday to achieve not to mention the grief caused by hidden nails in the original legs. Richard's saw will never be quite the same again.

In the workshop Bob has been leading the work on the Bamford rolling mill, with most of the components now cleaned up and re-painted. We will be in a position to start re-assembly soon, which will be an interesting process.

Dick has produced a large wood turning lathe, mostly timber framed, that should prove useful. After all the pedalling that went into the oak roller in the last couple of weeks, this new lathe has an electric motor. 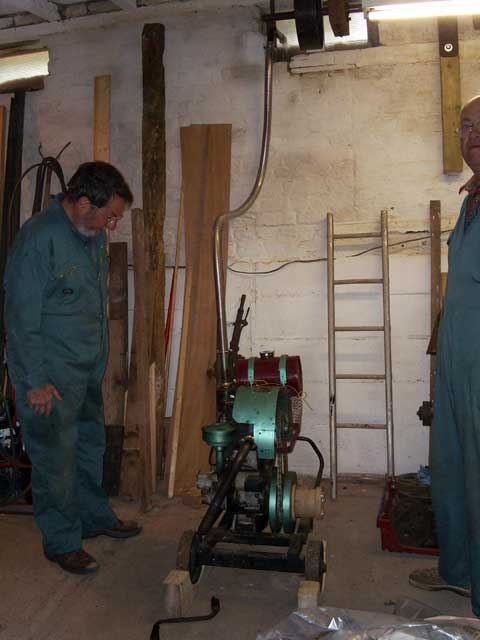 The Dennis portable petrol engine now has a complete exhaust system after Kim sourced an length of flexible pipe.

The exhaust gases and noise are now safely carried outside but the mechanical noise from the engine is still rather loud in the confined space of the workshop. Ear defenders will be the order of the day when we are working the lathe.

Two other tasks of note this week, both concerned with food hygiene, are the fumigation of the mill with smoke bombs as we left on Tuesday and the subsequent thorough cleaning away of all the dust and cobwebs on Thursday using our new Henry vacuum cleaner. Even if we never sell flour we still use the meal we have ground ourselves and we don't want to give our own team members food poisoning.

The winnower has its own part to play in this. The grain we get still has a small amount of dust and chaff mixed in and we can use the winnower, when it is finished, to clean the grain before milling. This would improve the quality of the resulting meal and flour.

Go to the previous entry before this winnower story