The team met on 5th June to find an unexpected waterwheel problem. We are going to have to delay any work on the wheel for a few more days because a grey wagtail pair have built a nest in the brickwork right by the waterwheel. The picture shows the male waiting for us to move away before flying to the nest. 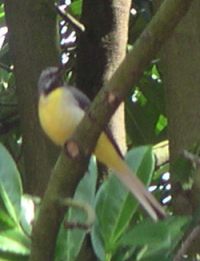 The nest must have been there for quite a few days because there are chicks being fed by the parent birds. We are amazed that they must have sat tight on the eggs while we worked around them, but now we know they are there we will leave them in peace until the chicks fledge.

Today’s team consisted of Martyn, Colin, John, Headley and Richard. The major task for the day was to install the second of the hardwood window frames that we have had made. The erection of the scaffolding was done last Thursday while Richard was away and apparently occupied the entire team all day. The second frame went in much quicker than the first and the first pane of glass was secured before we broke for lunch. The action shot caught Martyn and Headley on the outside offering up the first pane while Colin was inside. 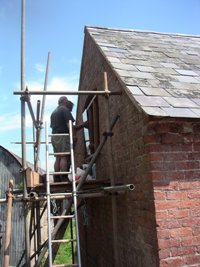 John has returned from his holiday and taken up his bricklaying trowel again. The last bit of wall outside the front door of the mill now has coping bricks on top and looks very smart. The next bricklaying job is a low wall on the south side of the new brick steps that descend past the waterwheel and the grey wagtail waterwheel problem. As a preliminary to building this wall John dug some footings and filled them with concrete. As usual the mortar and concrete was supplied by Richard.

By mid afternoon we had got both of the day’s tasks to a standstill. John couldn’t start building the next wall until the footings have set and the new window was fully glazed and only needs the arched fillet above the frame to be complete. The best tool to shape the fillet is a band saw, so Richard will cut it to shape at home and take it back on Thursday.

The last task for the day was to check how much steel we need to buy to make the replacement buckets and plates for the waterwheel. This is our other waterwheel problem because the price of the galvanised sheet steel that we need has gone up and is further increased because we need a relatively small quantity. We did our best not to disturb the wagtails while we counted the number of buckets and plates we need. The answer was eighteen buckets and ten plates, and that means we will need six sheets of steel costing the best part of three hundred pounds. Donations can be sent to The Shelsley Water Mill Society, c/o Midland Automobile Club, Shelsley Walsh Hillclimb, Worcester, WR6 6RP.

Read about our waterwheel problem? Click here to see the previous article.