Today we had a good try out of all the machinery that is fit to run. This was our last session before Christmas and the New Year and we want to be able to show what we have achieved when MAC members arrive on New Year's Day for their annual social walk up the hill. 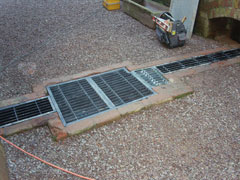 Headley had made the last of the grid section to cover the PTO shaft and that was slotted into place.

The strange shape of the brick channel has given Headley quite a challenge, with only one section being square.

The finished result is a tribute to his patience as well as his welding skill.

As well as Headley the team today consisted of Martyn, Colin, Max, Dave, Bob, Richard, Jonathan and Tony. The plan was to have a quick try out to make sure everything worked and then spend the rest of the day tidying up.

The wisdom of the try out was soon confirmed when an important part of the sack hoist broke. Woodworm again, we had thought it was okay but the damage was worse than it appeared on the surface. Dave soon had a replacement made and fitted.

Martyn, Colin and Richard fettled the wooden cogs in the great spur gear to get rid of some heavy vibrations caused by some cogs binding on the teeth of the stone nut. Longer running of the wheel with the stone nut engaged had clearly marked the oversize cogs and they were reduced in size by careful use of plane and surform.

A second prolonged run demonstrated that the vibration was greatly reduced. It also gave us time to try the chaff cutter. We don't have any straw but we fed it with strips of newspaper and some scavenged hay and it took them through without a change of rhythm.

The rest of the team spent the day sweeping, raking and tidying, leaving the site looking smarter than ever. Ropes were strung across spaces that we need to keep visitors away from and all the tools put away on shelves and cupboards. We won't know were to find anything when we come back in the New Year.

The light was fading fast as we packed up for the day and the year. Wishing each other a Merry Christmas and a Happy New Year we had all left before 4 p.m.

Season's greetings to all our readers and supporters, see you all next year.

Go to the next entry after this try-out story