An ice hazard greeted the team this morning when we met for the first working day of 2009. 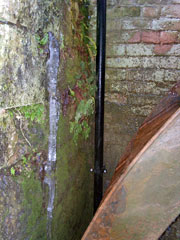 All the brick steps and the brick paving were covered in a thick film of ice and a large icicle hung down behind the waterwheel.

The wheel itself was also coated with a lot of ice.

It took the combined efforts of Martyn, Colin, Kim, Richard and Jim to make a start on repairing the sack hoist. The job needed much discussion and anyway we all wanted to huddle close together for warmth.

We were still in discussion when Jonathan and Tony arrived.

The sack hoist had broken when we were demonstrating it on New Year's Day. We had deliberately inserted a weak link so that we wouldn't break the winding drum and it did its job as planned when one of the demonstrations was allowed to go on a bit too long.

A quick fix on the day only lasted for one more run so we had left it to be fixed today.

We did the repair and started the wheel to give it a trial. It broke again so we had a bit of a re-think and fixed it again. This time it survived the test so we all retreated to the comfort of the gas heater to have a coffee, turning off the water to the wheel on the way past. The splashes from the waterwheel had coated the nearby brickwork with even more ice.

The coffee break was a long one as no-one was eager to go back into the cold. Martyn managed to fill an A4 page with a list of tasks that still need to be done as we all chipped in with comments and suggestions.

In the short period between coffee and lunch Tony did try to do a bit of landscape tidying but found the ground impossibly hard and the footing quite treacherous. Other team members explored the stream that feeds the mill pool and were surprised by the depth of the gully that it has cut into the hillside.

At lunch we all decided it was too cold to do any else useful so we locked up and left to get warm, agreeing to try again on Thursday.

Go to the next entry after this ice hazard story