We had a nearly full team today, seven workers in all as long as we are generous in our definition of a worker. There were times when there seemed to be more supervisors than workers, especially when Dave wanted to lay one last brick before taking a coffee break. 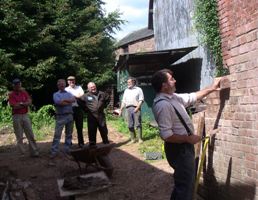 Dave and Max worked together on the hay-loft steps. The actual steps are now finished and the side wall is almost complete as well. The platform outside the door is now sound and will be finished with brick paving. We had several discussions about what form the railings should take. There used to be a rather nasty steel tube rail around the platform and down the steps but that was a twentieth century addition. A certain amount of timber may once have supported railings but memory suggests that most steps like these would have been completely unprotected. No decision has been made but we are fairly certain that complete authenticity would not meet with approval in the modern “Health & Safety” world.

After a short spell on the hay-loft steps John returned to the flight of steps that run down beside the waterwheel. He started building a curved wall alongside these steps back in May and between rain, nesting birds and holidays he has had no chance to make any further progress until today. A good solid session saw a considerable extension to this double brick wall. 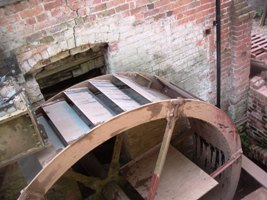 The four remaining team members, Martyn, Colin, Headley and Richard, picked up were they left off on Tuesday working on the waterwheel. As before, we spent the day drilling many holes and inserting bolts. There are not too many gaps to be filled now with only two soles plates and half a dozen buckets still to be fitted after a day that saw several repositions of the wheel. The wheel is getting much easier to rotate into a new position now that the balance is being restored, but it does mean that some of the silt that recent flooding has left behind gets lifted up and suspended above the workers inside the wheel. If the outside of the wheel is given a good clout with a hammer the mud drops onto whatever is inside the wheel. Unfortunately Richard did not notice Martyn duck inside the wheel and gave a distorted sole plate a mighty whack with a copper mallet. The clang of hammer on metal was not the only sound that disturbed the peace and quiet of the surroundings as Martyn complained about the mud landing on him. Probably not the best team building technique.

Late in the day we had a visit from an architectural historian who is working at the Court House. Amongst much advice that she gave us she also explained to the team about the carpenter’s marks that we had all thought were roman numerals. Apparently these were the 18th Century equivalent of “Insert tab A into slot B” and can give a lot of information about how a building was constructed, to a suitably trained observer that is. All fascinating stuff and we will probably be consulting her again.

Read about the team's day? Click here to see the previous article.