A conversation during a visit to Charlecote Mill in Warwickshire in the Autumn resulted in an invitation for Richard to join the miller, John Bedington, for his next stone dressing session. This happened on the first three days in December.

Stone dressing is the process that keeps the millstones working well and has a number of stages, all of which are quite hard work. Read on to see what is involved.

The first step is to remove the tun and all its superstructure. At Charlecote this includes detatching the grain chute from the grain bin above the stones.

Separating the stones and turning the runner-stone over comes next. This is not a task to be approached casually as the runner-stone weighs around half a ton and could cause a lot of damage if it rolled or fell. 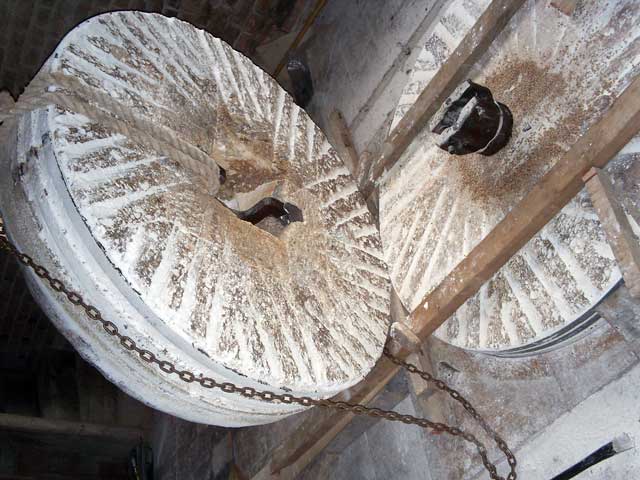 The stones are carefully pried apart and wooden wedges inserted. The gap is increased and blocks inserted until there is enough clearance to pass lengths of timber through the gap. These form rails to give the stone some  guidance as it is flipped.

They are secured in place by nailing cross pieces on and finally small blocks are fixed to stop the stone from sliding as it is lifted.

A rope is passed through the eye and secured so that a chain hoist can tip the stone onto its edge, the position in the photograph.

The stone is then tipped past its balance point with a wooden lever through the eye and lowered gently to the wooden rails. These need to be removed to allow access to the bedstone so more work with the pry bar and wooden blocks is called for. The end result is a pair of stones with the working faces exposed.

Next step was to get out all the tools for the next stage. These consist of a staff and a mill bill and thrift. The staff is a substantial length of timber with one perfectly flat face. John Bedington has a proof staff, a long thin surface plate, to check the flatness of his staff and makes any adjustments needed with a scraper. 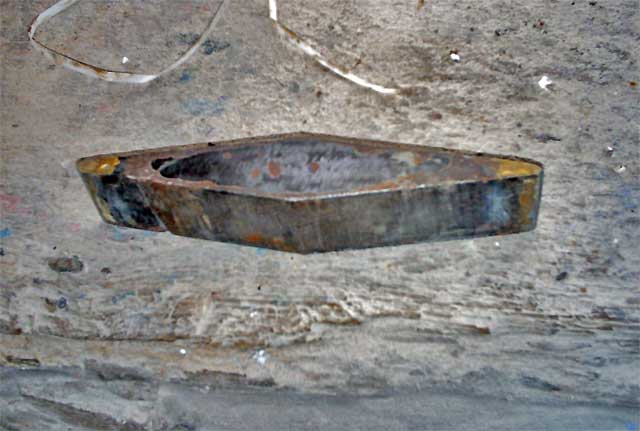 The mill bill is a shaped double ended chisel that is held in a wooden mallet called a thrift. John uses bills with tungsten carbide inserts but these still need to be sharpened several times during the dressing process.

Dressing starts by marking any high spots on each surface with a coloured marking known as raddle. Child's powder paint mixed with cooking oil is painted onto the flat face of the staff and this is then slid around the surface of the stone being dressed. The high spots get a coating of this 'food safe' raddle and can be removed by chipping with the bill.

Once the high spots have been chipped away the process is repeated as often as necessary to end up with a flat surface. The aim is to achieve a perfectly flat band about six inches wide around the periphery of the stone with a slighly relieved centre area. On the runner stone only the area around the eye is taken down a little further to form the 'swallow', basically a gap between the stones to allow the grain to enter.

The next picture shows the bedstone after it has been faced. The band of colour around the edge is quite clear and the two mill bills in their thrifts are waiting for the next stage. It took two people a day of patient chipping to get both stones to this state.

Once the stones are faced the furrows need to be deepened to compensate for the amount taken off. This entails more chipping with bill & thrift and calls for slighlty better accuracy than the facing process. The Charlecote stones get regular attention so this stage wasn't too bad and only took half a day for the two of us. The stones at Shelsley will need to have furrows cut virtually from scratch and it will take a lot longer. 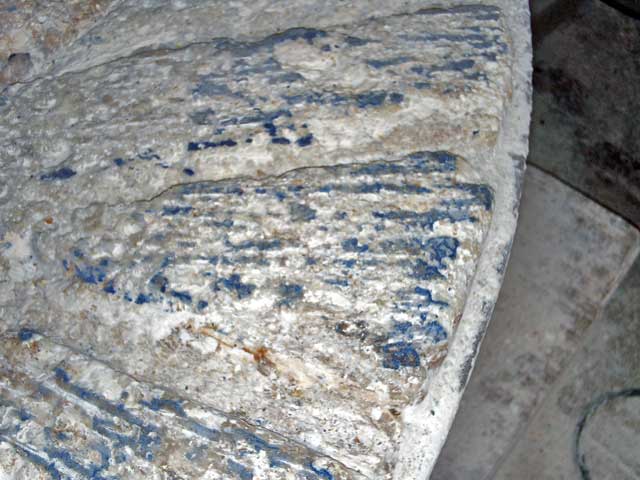 The last stage before the stones can be replaced is called stitching. This is the cutting of fine lines in the flat surfaces between the furrows.

As long as the bill is sharp this isn't as difficult as it might seem as each stitch only needs a single blow with the bill.  It only took an hour or so to do both stones.

The stitching in the picture is quite adequate for milling wholemeal flour but would need to be a bit finer if the meal  was going to be sieved to make white flour.

With the stitching completed  the stone dressing was finished and it only remained to put the stones back together and run them in. Replacing the runner stone was essentially the reverse of the removal process but with even more care taken not to drop the runner stone onto the driver. 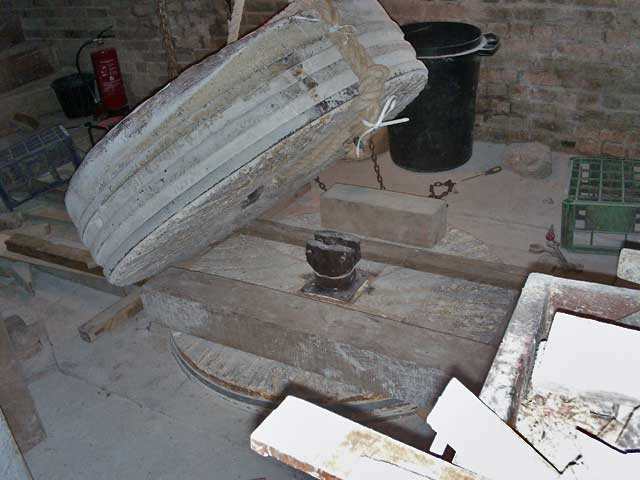 Wooden blocks were placed on the bedstone to lower the top stone on to. These were then progressively reduced in size to lower the stone over the driver with levers used as needed to postion the runner stone accurately.

This proved to be a mixture of care and brute force but the rynd engaged in the driver and we could lower the stone the last bit of the way, making sure that all pieces of wood were out from betwen the stones. A few handfulls of grain spread on the stones to act as a lubricant when the stones first start and we were almost ready to mill again.

The tun and its superstructure were all replaced and the hopper filled with some feed barley. Time to start the  waterwheel. Unlike the wheel at Shelsley the undershot wheels at Charlecote normally start very easily but with the grain between the stones made them very sticky and a quick push was needed to get everything turning. The result was a nice steady flow of barley flour, just right. The first few bags from the newly dressed stones would go as animal feed, just in case there was grit in the meal.

This was a very satisfying end to three energetic days for Richard who has learned a great deal about how a  commercial mill operates as well as experiencing stone dressing in a working watermill. A big thank you has to go to John Bedington for letting Richard loose in his mill even if he did benefit from the free labour.

Richard will have to wait until the New Year before he puts his new skills into practise as we are not going to be working at Shelsley after the 8th December, giving all the Dibnahs a longer Christmas break.

Go to the previous entry before this stone dressing story