March 15th was a day for starting jobs at Shelsley Watermill as well as continuing tasks already in progress. We had a good team consisting of Martyn, Colin, Derek, Max, Dave Headley, John and Richard plus two professional builders. 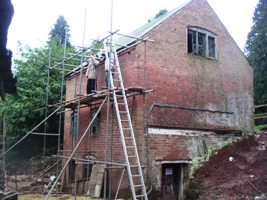 The two builders were erecting the scaffolding necessary to work on the roof. The mill is the only one of the farm buildings with a slate roof, all the others being tiled or corrugated iron, and it is in need of some work. Many slates have slipped and some have escaped entirely so we have had to get the professionals in. Now the job is starting we can look forward to having a weather-proof roof in the foreseeable future.

Derek carried on from where he left off last week, clearing rubbish and brushwood from the site and building a bonfire. He has built bonfires several times now but there still seems to be an endless supply of debris to burn.

Richard started his day by mixing mortar for John to continued wall building. He then switched to making lime mortar for Max and Dave. Max finished the stonework at the blind end of the waterwheel pit and Dave tackled the rebuilding of the mill wall below the wheel shaft. We have been looking at this last task for months, knowing that it must be done but also knowing that it was going to be difficult because the wheel gets in the way. As he could not carry on with last weeks job around the PTO shaft without getting in the builder’s way he decided to repair the wall, starting by removing the rotten bricks and mortar. By the end of the day things were looking a great deal better and someone was heard to comment “We now have three competent bricklayers. Oh, and Martyn!” 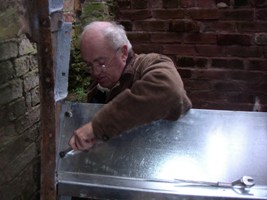 Colin and Headley were also starting a major task, this time the replacement of the waterwheel buckets. We have six new buckets made but not drilled for the fixing bolts and some time was spent looking at ways of marking up and drilling the necessary holes. The first shock was the realisation that the buckets are not all the same. At the joins between the segments of the wheel rim the buckets need to be made slightly smaller, only about half an inch, but an awful lot to file off if we had made all of the buckets in one go. The next problem was the discovery that the hole spacing is not quite the same on the two ends of a bucket. All in all we were pleased to be able to bolt one bucket in place by the end of the day.

The Court House team have made good progress with the pool, moving an enormous quantity of mud and silt. There is still a lot to do but yet again it is starting to give an impression of how it will look when it is all done.

Enough about starting? Click here to see the previous article.