Bucket replacement was high on the agenda today as we suffered from a biting cold wind in spite of the sunshine.

We had decided to try an earlier start, meeting at ten o’clock rather than half-past ten and most of the team did arrive on time. Martyn, Colin and John were joined by Richard before they had got started and Headley and Derek arrived a little bit later.

Martyn had brought his chainsaw with him, so he and Derek got on with clearing the area between the mill and the church of fallen branches and brushwood. Most of the trees in this area are healthy and will be kept in place but there are a few that are decayed and dangerous and these are being dealt with. Derek soon had a bonfire going and the area is beginning to look almost cared for. 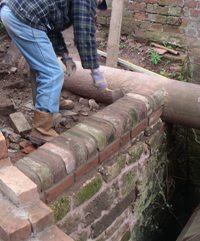 John concentrated on finishing of the wall that forms the blind end of the waterwheel pit, capping the tufa stone with a couple of courses of brick and topping off with bull nose bricks. The finished wall looks very authentic, as you can see from the photo.

As John was the only bricklayer today, Richard had an easy time with the cement mixer and managed to spend most of the day assisting Colin and Headley with the bucket replacement. We fitted the first back plate to the waterwheel today. The first to be made as well as the first to be fitted, that is. It proved to be half an inch or so short, so it is just as well that we hadn’t gone ahead and made all fifteen. 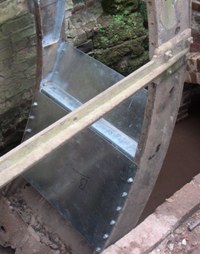 We have now fitted a prototype bucket and a prototype back plate so we know what we need to do to make and fit all the replacements. There is nothing very difficult about doing the job, in technical terms anyway, but it does represent a considerable investment in effort. We will get quicker at fitting the components to the wheel than we are at the moment but even so it is going to be many weeks before the wheel is complete. When bucket replacement is complete, though, we will be much closer to having a working watermill.

Before we can have a working watermill we need a supply of water and this has also got a little closer as the Court House team have finished digging out the mill-pool. The cleared pool does not look very impressive as it is, just a lot of mud, but the mud is between four and six feet lower than it used to be over a large area. The team are hoping to get things tidied up a bit before the open day on March 31st and maybe even have the waterfall running.

Not all of the team members can get to the mill every week but still manage to provide support and encouragement. In Drene’s case the support often takes the form of cakes and scones for the workers and they are always very well received, even more so on such a cold day like today.