A Spring Day at Shelsley Watermill

Another fine spring day meant that we worked outside again on the 13th March. Spring must be upon us because a majority of the team arrived topless. The cars were topless, that is. John has driven the Mazda topless on every sunny day through the winter but Richard has only just consigned his hard-top into summer storage. Headley trumped us both by arriving in his Caterham. Martyn and Colin continued to put practicality above style but did hide their vehicles in the barn to avoid the photo-call. 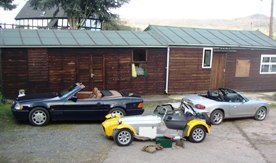 We took advantage of the weather on this sunny spring day to get on with restoring the wall around the top of the waterwheel pit and along the side of the pit. John worked on the curving wall above the wheel while Martyn carried on with the brickwork alongside the wheel. Richard supplied the mortar. There is still a lot to be done to join up the various walls and levels in this area, not least because this will probably be a high traffic area for visitors with the best view of the wheel. 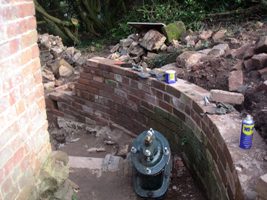 The other major task of the day was tackled by Colin and Headley. The big gate valve on the headstock leaked badly when we tested it with a good head of water so it had to be taken apart and reassembled with new gaskets. Hopefully we have got it right this time but we won’t be able to test it for a little while because the other end of the pipe from the mill pool is temporarily blocked while the pool is being cleared. The reassembled valve and the wall that John has been working on can both be seen in the picture.

Another effect of the improvement in the weather, the silted up part of the mill pool has dried out enough to support the excavator. This work is being done as part of the restoration of the Court House but we are taking a close interest of course as we need the water from the mill pool to run the mill. Once this is complete we will find out if we have managed to assemble the gate valve better than our first attempt.

As is often the case, we spent a certain amount of time discussing how to deal with a particular problem, on this spring day it was the outer waterwheel bearing under discussion. We have to obtain or fabricate a replacement for the original that disappeared many years ago and also mount the replacement on something. Current thinking is to build a brick plinth and top it off with timber to carry the bearing. The journal on the wheel shaft has worn into a taper but we are pretty sure that this won’t be a problem at the speeds the wheel is likely to turn. We have to keep reminding ourselves that we are not dealing with high performance engines!

Read about this spring day? Click here to see the previous article.