We had some rainwater goods delivered last week, basically guttering and down pipes, so the team made a start on fitting them today. 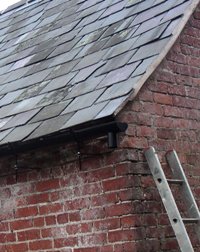 Holidays and other commitments cut the team down to just four, Martyn, Colin, John and Richard. Martyn had not seen the guttering until today and viewed it with interest. It is all made from galvanised steel which is powder coated after fabrication. Once in place it will be very similar in appearance to the sort of rainwater goods that would have been fitted to the mill a hundred years ago but hopefully better protected against corrosion.

While John got to work building a wall alongside the steps that pass the waterwheel the other three examined the pieces that make up the complete rainwater system. We decided it was no more difficult than Meccano and soon had a clear idea of how it all fitted together.

As always the first steps were a little hesitant, with a fair amount of discussion, but we soon had a row of brackets up along the wall nearest the return road and the Court House. The biggest problem turned out to be that most of our ladders were too long to fit below the edge of the slate roof. This meant that we had a single ladder to work off and had to keep moving it along. Great exercise for Martyn after his recent break as his muscles have gone a little slack. Richard managed to catch him out early in the day by passing him one of the downpipes one handed. It was a lot heavier than Martyn expected!

You can probably guess that the picture was taken towards the end of the day. The down pipe from the gutter will run across the end wall of the mill until it is above the waterwheel pit and then go straight down. We don’t need to worry about soakaways on this job.

While all this guttering work was going on John had carried on his bricklaying to good effect and yet another wall had taken shape. He really is getting quite good at this. The rainwater goods team will only have the two sides of the roof to practise on but it is a safe bet that the second side will go up faster than the first.

Checked out the rainwater goods? Click here to see the previous article.