Water power was in the news this week. Late Tuesday evening saw two weeks worth of rain fall in three-quarters of an hour. At Shelsley the run off was so powerful that it filled the mill pool to overflowing in minutes in spite of the sluices being open. In the farmyard a drain that normally trickles into the stream shot six feet across the stream and dug a hole in the stonework of the yard. By the time this picture was taken the flow had returned to a more normal level but you can see the size of the stones thrown up at the bottom left of the photo. 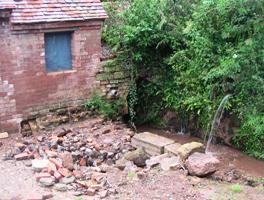 The guttering that we had put up on Tuesday was still in place today so Martyn and Colin fixed the down-pipe to the end wall of the mill. There is a stop-end to be fitted at the other end of the guttering and exposed metal needs to be given a lick of paint to complete the job on the west side of the roof.

The team today was completed by John, Max and Richard. Max and John concentrated on the hay-loft steps in between dodging showers, while Richard spent some time removing rubble from the culvert and stream. Some of the rubble had been carried through the culvert by the force of the water power for more the a hundred feet. Whole bricks had been moved from near the mill pool into the farmyard and vast quantities of mud had been left behind. 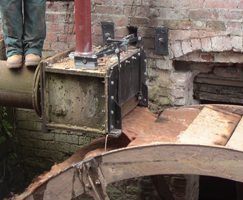 Up at the mill pool the Court House team, who live on site and had seen the full force of the storm, were keen to use the extra water power to clean some of the silt from the pool. The first step was to put the plug back in the sluice to fill the pool. A good head of water soon accumulated and we opened the main valve to let water onto the waterwheel. Sure enough, the first water to arrive at the wheel could only be called water because it was too runny to call mud. Given the sheer volume of water flowing through the pipe it was not long before it was running much clearer. The same could not be said for the tailrace and the culvert as the flow moved some of the silt out and down the stream.

The mill pool was drained again before we left for the day with the Court House team apparently well pleased with the trial. In our turn we had had a good day with progress on the guttering and the hay-loft steps as well as having seen just how much water power we will have available when we have completed the work on the waterwheel.