On a day for dodging rain showers the team concentrated on the hay loft steps today and had got about half the flight rebuilt by the end of the day. 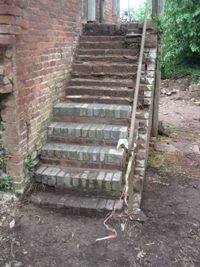 Max did the bricklaying while John kept him supplied with mortar in a reversal of the usual roles. Dave cleared away the rubble from the side of the steps. Colin and Headley had a bit of a scavenge and came back with a large workbench. So large that they had to borrow the MAC pickup to bring it round to the stable block.

It was at this point that Richard turned up wearing a collar and tie and with shiny shoes. After an attempt to supervise the installation of the newly acquired bench he realised that the team hadn’t recognised him so he went off to change into more suitable clothing!

By way of thanks for the workbench, Headley did some welding for the Court House team. Apparently the front wheel had fallen off a moped and needed welding back on. Everybody seemed happy with the outcome so it must have worked. 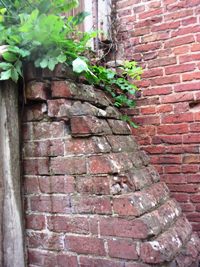 The hay loft steps rise to a platform outside the loft door and this platform has become heavily infested with roots. It is buttressed with some nicely shaped bricks, but you can see some of the growth and the damage it has done in the picture. The later part of the day was dry enough for Colin, Headley and Richard to work on this part of the steps to clear away roots and try to get back to sound brickwork.

Before we started tearing out tree roots from the brickwork we did take the precaution of shoring up the underlying vaulting, just in case the roots go further through than we think. There was a small tree that had been cut off level with the bricks that had roots spreading for several feet through at least two courses of brickwork. By the end of the day we had still not got it all out but some good progress had been made.

Read about the hay loft steps? Click here to see the previous article.