The accent was on preparation as the hillclimbing season reaches Shelsley Walsh. The first hillclimb meeting of the year takes place over the Sunday and Monday of the Bank Holiday weekend and we expect to run the mill for interested spectators during the lunchtime break in competition on Monday. 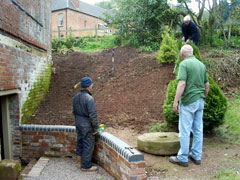 Gardening occupied several team members on both Tuesday and Thursday. The bank to the north of the mill was prepared and sown with grass seed by Kim, Finton and Martyn on Tuesday, but we don't expect it to be covered in grass by the weekend!

The area on the south side of the mill, towards the church, was subjected to  strimming and weeding on Thursday, mainly by Tony and Jonathan. They needed full waterproof kit because the rain kept the rest of the team indoors.

Inside the mill Richard and Jim did a bit more work on the downstream tun but not until they had cleaned out the grain chute that feeds the upstream grain hopper. The last of our supply of maize was fed down the chute to check that all was clear and working properly. 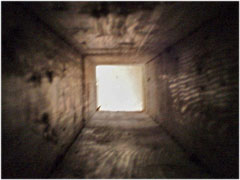 On Thursday, Richard replaced the control string for the upstream grain shoe with stronger looking twine and re fixed the sacking skirt around the bottom of the grain chute.

Before fixing the sacking he took the opportunity to photograph the inside of the chute, polished by the passage of grain over the years.

Both days saw activity with lime wash brushes inside the stable, as well as yet more brickwork repair and pointing.

Two cupboards had to be moved to allow access to the brickwork behind them so they were emptied out on Tuesday. There  were many cries of "I wondered where that had got to." and "Whatever's this." Once the cupboards had been moved and re-secured everything could be put back and the stable could be tidied up ready for spectators. 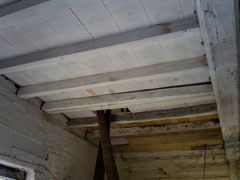 This picture of the ceiling above the root shredder gives a good idea of how much difference a coat of limewash makes.

The area beyond the drive belt has yet to be painted and the contrast is quite obvious.

Thursday after saw the team arranging various pieces of scaffold tower and wire mesh as temporary guards around the machines and drive belts. In the mill we simply rope off the area around the stones, but the machinery in the stable is much more exposed.

On the wildlife front the grey wagtails have two chicks in the nest, the  bird nesting in the north wall of the mill has been identified as a blue tit and a mallard has been seen on the mill  pond with eight ducklings.

All in all it has been a good week, even if Thursday was a bit wet. The mill is  essentially in working order and we only need to sort out some more permanent guards for the machines in the  stable in preparation for a formal opening.

Go to the previous entry before this preparation story