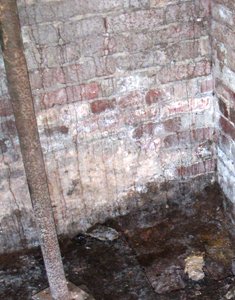 A new problem has reared its head at Shelsley Mill today. We only had a small team so we got started with real energy, clearing out the ground floor of the mill so that we can work inside when the weather turns bad.

We already knew that we were going to have to build piers to support the beams and joists of the working floor as the timber has suffered from damp where it has touched the walls. With this in mind we have moved the bags of cement to another dry location and have even installed some lighting. It was after lunch, when we took shelter from a heavy rain shower that we realised we might have a problem.

Now the area is lit we could see just how much water comes through the walls once it starts to rain. Beads of water were forming on the walls and then running down. Okay, it was heavy rain but even so it looks as though we will have to do something about the drainage.

On the other hand, it must always have been like that. Even with good ventilation it would have been virtually impossible to store flour for very long but maybe flour was ground as required and not stored in the mill at all. If we follow that idea we can just accept that water oozes out of the walls and just make sure that it can drain away!

Before the heavy rain set in we did make progress outside. Martyn carried on building with tufa blocks alongside the wheel while John prepared footings for the continuation of the wall he has been working on for several weeks. If they both carry on as they are going they will meet in a few days time

Headley tried to prepare the sluice box for fitting the new stack pipe but hit a problem because the box is made from cast iron which defeated the gas torch. He now has to find another way of making the new pipe fit, but he is quite confident that there is a way.

Richard actually had to do some work today, mixing lime mortar and conventional concrete. It made a change from loafing around taking photographs and chatting, which is what he normally does.

What with the heavy rain and the discovery of the new problem with the oozing damp we ended the day slightly earlier than usual. Even so, we have achieved a little more progress today.

Read about the new problem? Click here to see the previous article.