We have started the New Year 2007 well, with the MAC New Year’s Day meeting raising £300 in donations. Many thanks to all who gave.

The first working party of the new year gathered on this Thursday with an almost full complement of volunteers. Work progressed well on the tufa wall beside the waterwheel and on the PTO channel. Maybe it’s because Martyn left at lunchtime and Colin is away in Australia that we were able to get on with the work! Just what we need for a flying start to New Year 2007.

Dave’s method of levelling the footings for the PTO channel has already been the subject of comment, so he was ready for some ribbing when the shuttering was removed. He was not disappointed. Nothing that a good bricklayer can’t straighten up though, so no problems there. 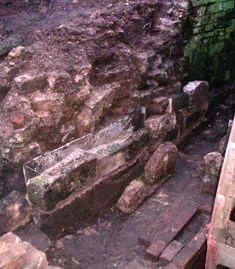 Derek brought his diamond blade masonry saw which made rebuilding the tufa wall much easier. We are using proper hydraulic lime mortar for this wall to give it some flexibility, as well as setting in some mesh reinforcement behind the stone. The only snag with this is that lime mortar stays workable for quite a long time so we can only build a couple of courses of stone at a session or the weight of the stone would squeeze the mortar out of the joints. Slow and steady will get us there in the end though.

We were joined today by Giles, who likes to see everything done “Just so”. He spent the day measuring up with the intention of producing drawings of the mill structure. To our surprise the building is surprisingly square although there are some interesting variations in the brickwork as you move round the building.

Giles also noticed a couple of features that had escaped us. The bottom door seems to be a later insertion as it is the only opening that does not have an arch and the large window in the basement is the same width as the door nearest the road. Probably the ground level has been raised at some time. On the same side as the bottom door there is a horizontal beam let into the brickwork which could have been the support for a lean-to roof. This theory is supported by the projecting course of bricks above the beam, probably providing some weather seal before the advent of lead flashing.

All this would seem to indicate that the banking to the roadway has been increased in thickness, at least in the area adjacent to the mill. Yet another job for the JCB to do while we have still got it available.

So we have made a start to the New Year 2007. Watch this space for more progress here at Shelsley Watermill.