Amongst the various jobs today we inspected one pair of millstones. Members of the team have visited a number of mills recently and talked to millers so we had a good idea of how the stones can be approached for inspection and maintenance.

Today’s team of Martyn, Colin, John D, Richard and Max was joined by John N on one of his occasional visits. He spent the day clearing rubble and weeds from around the barn and gateway into the farmyard and shifted a great deal of rubbish into a trailer for disposal at the end of the day. We don’t know where he finds the energy, but we all hope we are as fit when we reach his age!

John D finished the steps down into the waterwheel pit after a slightly false start. It will be so much easier to walk on these steps rather than the clay slope that used to be there, so we will soon forget the mistake buried inside the brickwork. 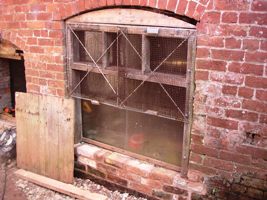 Max had to leave at lunchtime but he finished the repair of the mill wall below the bottom window that he had started last week. Yet again a small job that makes the building look much better. After Max had to leave Richard used the lime mortar left to do some pointing up, a skill he had kept hidden until now.

Martyn and Colin started the day shovelling silt out of the culvert but soon realised that the silt would be replaced the next time we part fill the pool to run the wheel so decided to leave it as it is until all the work on the pool is finished. Water from the finished pool will be free of silt because it will feed from well above the bottom of the pool but every time we partially fill it and then take the plug out again we flush some of the silt from the bottom of the pool into the culvert. 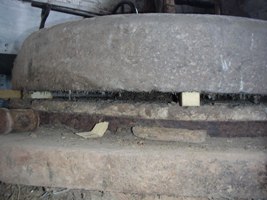 They moved inside the mill and removed the hopper, horse and tun from the pair of millstones nearest the road. The visits to other mills had at least taught us the names of the wooden bits above the stones. The tun is the box around the stones that catches the flour, the horse is the frame that supports and shakes the hopper that feeds grain into the stones. They are all designed to lift off so that the miller can maintain the millstones.

Many years accumulation of dust had to be swept up, much of it left behind by generations of woodworm that have enjoyed the softwood around the stones. Our first impression was that the two stones are different materials. The fixed stone, the bed stone, seems to be a composite of blocks cemented together and bound round with metal straps. The runner stone on top is a single stone that has been adjusted for balance by the addition of some pieces of lead apparently nailed on.

Some work with wedges and a pry bar raised the runner stone enough to get props between the millstones and let us look at the furrows in the stones. We expected these to be well worn, but they are in surprisingly good condition and at first sight would appear to be capable of grinding wheat into flour without too much work. However there is an awful lot of work to be done before we can try that theory out. 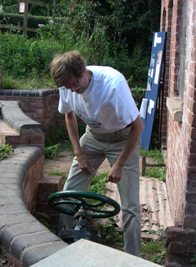 Finally, we have had complaints that the webmaster never appears in pictures. Naturally he is always behind the camera and anyway he hardly ever does any work worth photographing. However, last Sunday saw the mill host the finish of a MAC Classic Section run that visited a number of watermills and Richard was caught on camera preparing to turn the wheel on the penstock valve to turn the waterwheel. The waterwheel turned and the audience applauded. A good end to a pleasant day that seemed to be enjoyed by all the participants, including most of the mill team who like classic cars as well as watermills. Nobody has turned up with a steam engine yet, but we hear tell of vintage tractors.

Admired the millstones? Click here to see the previous article.