Just half of the six man team did brickwork today while gardening and surveying happened around them. 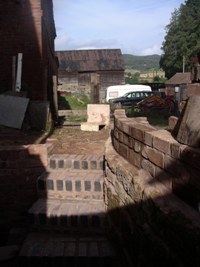 John began to extend the brickwork at the side of the wheel pit above the steps he finished on Tuesday. This wall forms a gentle curve that lets him exercise his judgement about lines instead of relying on straight edges and levels. There didn’t seem to be too much muttering from that area so we assume he was enjoying himself.

Max and Dave shared a mix of lime mortar and put the finishing touches to the corner of the barn and the hayloft steps as well as repairing the sill of the hatch above the PTO shaft. Max had to leave at lunchtime to dog sit, or so he told us, but we could definitely see where he had been as yet another bit of dodgy brickwork got fixed.

Derek attacked the overgrown fence above the stream, removing vast amounts of ivy and other growth and building another bonfire. This is the same area that John N worked on last Tuesday and between the two of them the area by the farmyard gate is beginning to look quite cared for. By contrast, the wall of the barn by that spot looks quite precarious and will be receiving some attention soon. 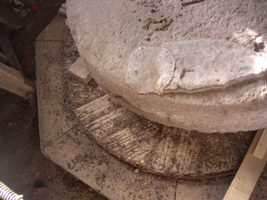 Inside the mill, Colin and Richard continued to examine the millstones and the drive to them. There is a great deal of decay in the timber hurst, the frame of the mill, in the corner where damp will have penetrated by the waterwheel. We spent a large part of the day working out a sequence that would enable us to examine the timbers that support the pair of stones and the drive to the runner stone.

Working with baulks of timber and a large pry bar, we raised the runner stone onto rollers so that we could get at the mace head that supports and drives the stone. We managed to get this clear enough to remove the accumulated dust and get a good look but we won’t be able to inspect it properly until we have raised the runner stone completely out of the way. The mill doesn’t have a dedicated stone crane and the runner stone must weigh at least half a ton, or even half a tonne, so lifting it is not a trivial job. The old millers must have done this regularly to re-dress the stones but they aren’t around to tell us how they did it. There is no evidence that it ever happened at Shelsley Mill but folklore suggests that if a millstone fell it didn’t stop until it reached the lowest level of the mill. This may be why the floor boards around the millstones are two inches thick.

We will bring some serious lifting tackle when we re-convene next week, but for now we have decided that the millstones can stay where they are for a little longer.

Seen the brickwork? Click here to see the previous article.