Today’s team had a bit of a tidy up before we have visitors on Sunday. We carried on as normal in the morning with Dave and Max repairing brickwork at the end of the barn and on that side of the mill while John laid another step in the flight down to the wheel pit. 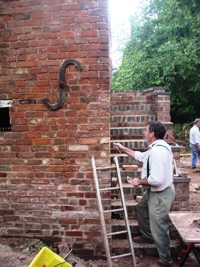 Max repaired the brickwork under the large window that faces the barn at ground level. This window has lost its sill, if it ever had one. It is possible that this was originally the door into the bottom floor of the mill before the ground levels were changed. Dave picked up where he left off rebuilding the buttress on the corner of the barn and as you can see from the picture he has nearly finished. There is still a bit of pointing up to be done, but it all looks so much safer than it did.

Martyn, Colin and Richard moved several wheelbarrow loads of mud from the wheel pit and tailrace and generally tried to improve the clearance of water away from the waterwheel. At the moment the waterwheel stands in about a foot of water and we know that it turns okay, but it would be much more efficient if it was clear of the water. We can’t work out how this could ever have been achieved because there is a brick floor in the culvert at the far side of the farmyard that is only nine inches lower than the level near to the wheel, so it possible that the wheel always stood in some water, even when it was first installed. This could be a consequence of the conversion from undershot wheel to overshot that we believe took place when the current iron wheel was fitted. 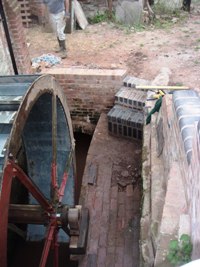 John managed to build another step in the flight down into the wheel pit while the digging team hauled buckets of mud past him, so there is only one more step to build and a bit of brick paving to complete the job.

Lunch was a merry affair as we checked out a number of cans of beer that had passed their ‘best before’ dates. Two proved to be a bit cloudy and got poured away but the rest were fine. Eventually the bricklayers went back to work to finish off the last mix of mortar before it went off, to be followed a little later by the other three of the team.

The afternoon was mostly spent having a tidy up of the site and the wheel pit in particular had accumulated a lot of junk. Colin even used a couple of buckets of water cleaning the brick paving beside the wheel, the first time we have seen those bricks for quite a while. Hopefully our visitors on Sunday will like what they see but the highlight will be at half past four when we open the penstock and demonstrate the working waterwheel.

Seen the tidy up? Click here to see the previous article.