As we gathered this morning we were joined by Kim, a MAC member who has decided to do a bit towards the restoration of the mill. He was given a quick tour of the site and then put to work helping Derek with the never ending weeding and general gardening. 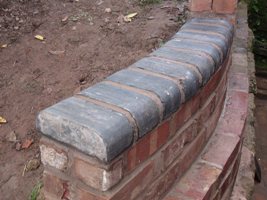 John added the coping bricks to the wall he almost finished last week. Unfortunately we are two bricks short of the finishing the job. By coincidence, the original donor of the coping bricks visited the mill today not to bring more bricks but to try out the gear teeth he had made. We did ask if there were any more bricks available but we had already received all that he had had. We will have to spread our search out wider. The picture shows the type of bricks we need. If anyone has a number they could donate or maybe even sell to us we would be pleased to hear from them. You could contact us via this website or via the MAC address.

Brian, the brick donor, has also volunteered to make some of the wooden gear teeth and he wanted to check the first ones he has made for size and shape. There are two sizes, large teeth that fir in the main gear that drives the stones and smaller teeth that drive the sack hoist. The large teeth he had made were a close fit and looked very good but the smaller prototype was just too big to fit into its socket although the shape was fine. He went home fairly happy, with a clear idea of what he has taken on; making sixty-four large teeth and forty-eight smaller ones. 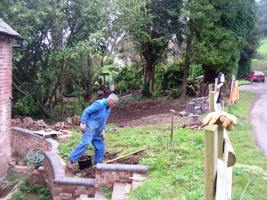 Martyn had returned from holiday and spent the first part of the morning catching up on progress in his absence. After lunch he joined Derek and Kim and hauled several trailer loads of rubble off to the hardcore dump. It is amazing how much rubble was hidden amongst the weeds in front of the mill but we managed to clear it all away. The local pheasant population seems to like it when the soil is turned over, scanning the ground for any tasty morsels and seemingly ignoring us.

Colin and Richard spent the morning making sure that it was possible to support the main beam supporting the centre shaft while repairs are made to the timberwork and discussing possible ways of doing the repairs. Colin had to leave soon after lunch, so Richard joined the gardening team.

In summary, we have a tidier site, we know the supply of gear teeth is in hand, John laid more bricks, we now have a reasonable plan of work for repairing the timber hurst. Oh, and the pheasants seem content. 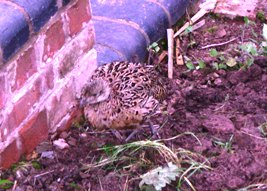 Read about the gear teeth? Click here to see the previous article.