Today’s excitement was finding a flour paddle. Okay, it wasn’t the most exciting of days but finding any of the old miller’s tools is a surprise as most of them will have gone as souvenirs or just as firewood long ago. Happily this flour paddle survived. 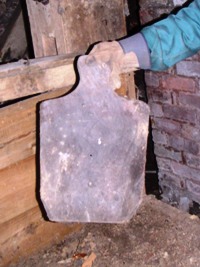 It was the same team today as on Tuesday, namely Colin, John, Headley, Richard and Max just for the morning. The jobs tackled were the same as well, but the interruption this time was not from the weather but from a delivery of drain pipes.

A lorry arrived with a load of very large plastic pipes intended for the re-routing of the land drain that caused so much damage in the summer rains. Nothing to do with the mill at all but the driver had no way of unloading without some help and there was nobody else around. Pensioner power got the job done, and the driver went on his way happy. What the local contractor will say about where we left the pipes will have to be reported later.

Max put the finishing touches to the paving at the side of the waterwheel and it is so much safer to walk on than it used to be as well as looking authentic.

John got well stuck in to bricklaying and by the end of the day had completed the wall between the wheel pit and the steps with the exception of the coping bricks. As you can see from the picture it all looks good. 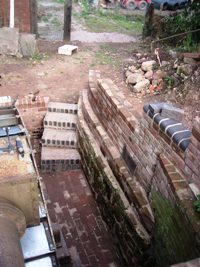 Headley made some more progress with fitting splints to the wheel spokes in spite of a lack of electricity at one point. We all took the opportunity to break for lunch when this happened only to find that the problem was a tripped breaker not a supply outage. Headley is drilling holes in the splints with a small bench drill that normally lives on Richard’s clock repair bench and he has to use a delicate touch to get it to turn the large drill bits needed, but he seems to have got the hang of it well. We can all sit and watch him work quite happily.

Colin and Richard continued the survey inside the mill, working out what needs doing and in what order. As with the millstones, we have had to do some dismantling to be able to determine what can be left as it is, what needs to be restored and what will have to be replaced. Not too much of the latter, hopefully, as we want to keep everything as original as possible. The woodwork have been voracious though, and some of the timberwork is beyond saving but it will form good patterns for new parts.

It was while we were cleaning the bottom of one of the flour bins that we found the flour paddle, lying right at the bottom and covered in dust and rubbish. It seems to be made out a fairly hard wood, possibly walnut, and is not too badly worm eaten. Maybe we will be able to use it for its intended purpose one day.