The timber frame, or hurst, is the oldest part of the mill, probably dating from the 17th Century. The brick shell of the building was added later and the two components have existed side by side for a long time. In places the function of some of the timbers has been superseded by the brickwork and the subsequent decay of the timbers is unlikely to cause structural problems. Elsewhere though both timber and brickwork are showing signs of neglect and decay that we cannot ignore. 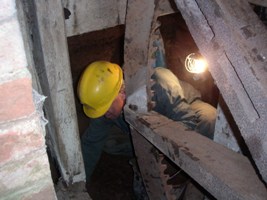 Around the gear-pit the timber frame sits on brick flooring that runs to the edge of the pit. Neglect has led to this flooring holding moisture and this has not been good for the timberwork, although the rot has not gone too far. Clearing the gear-pit to undo the neglect and restore the drainage necessary to reduce the damp has highlighted the fact that the sides of the gear-pit are unsupported. Basically they consist of badly decayed brickwork standing on wet earth. There are no foundations for the majority of the sides, although there are stone footings at one end of the pit.

Martyn and Dave spent all day in the gear-pit in very cramped conditions clearing out the mud so that Dave could cast a professional eye on the situation. Colin kept up a steady supply of buckets to take the spoil away. It is obvious that we will have to insert some substantial underpinning but we should be able to do it so that the final result is invisible. 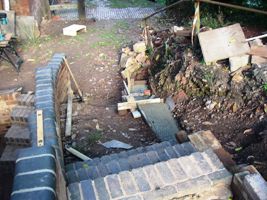 Headley completed the repair of one spoke in the waterwheel and made a start on the last one. The waterwheel has twelve spokes in all, six each side, and seven of them had cracked. Three had already been repaired in years gone by and the one on the outside of the wheel was splinted in October last year. The three that Headley has been working on for the last few weeks are on the side nearest the mill building and can only be got to through the opening in the side of the mill. This is why we have only got round to doing the repairs now it is easy to turn the wheel to where it is needed. We haven’t told Headley that the wall he stands on to do the work doesn’t have any foundations in case he gets upset.

Read about the foundations? Click here to see the previous article.