Having drawn up the design, Kim got on with gate making. 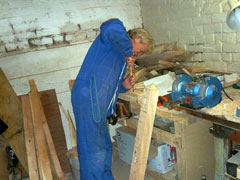 The flame proof mechanic's overalls are a bit 'over the top' for this sort of woodwork, but he assures us they are nice and warm.

The gates are to go at the front entrance to the mill from the roadway. We have already set the  posts so Kim has to get the dimensions just right.

Jim was also engaged in woodworking, putting the finishing touches to the output bin inside the mill. Like so much of the mill furniture the original had suffered badly from woodworm so a copy  was needed.

It is interesting to see how different timbers are attacked by  woodworm. Oak heartwood is immune from the borers, just too hard, but softwoods like pine get riddled. There are some pieces of what we think was elm wood that have been reduced almost to powder. As far as possible we are replacing like for like but elm is virtually unobtainable so we are going to use oak instead. 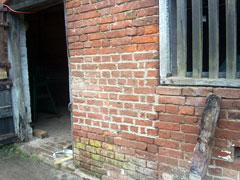 John made up a small mix of lime mortar and made a start on pointing up the outside of the stable block.

It is quite hard to tell from picture but the new mortar is a close match with the original, at least on that part of  the wall.

Close study of the brickwork of the building gives an insight into the history, with handmade  bricks set with lime mortar alongside much later repairs done with 'modern' bricks and cement mortar. The  workmanship is quite varied, with some of the early repairs being barely detectable and later patches very sloppily done.

The entire stable block needs to be done, so this is a job that is going to keep several members of the team occupied for weeks to come, if not months.

Elsewhere Colin, Richard and Headley put a few  finishing touches to the beet shredder, painting the new bolts to match the old ones and so on. Then they fitted the line shaft with a suitable sized pulley ready to link up with the shredder.

Finally, Bob returned to the team after a couple of weeks off and did yet more limewashing.

Go to the next entry after this gate making story