Colin picked out the lettering on the beet shredder by using skills from a lifetime in the printing industry.

Just like applying ink to type except that the ink was red paint and the type was the cast iron cover for the shredder blade.

We did have a discussion about how Bamfords would have achieved the same effect, a steady hand with a brush or the same method as Colin used. We didn't reach a firm conclusion but Colin's method produces results that are very  like examples we have seen.

Most of the rest of today's team worked on the re-assembly of the beet  shredder. This meant Dave, Max, Headley and Richard, while John D repaired a hole in the stable wall and John N dug steps out of the bank of the stream. 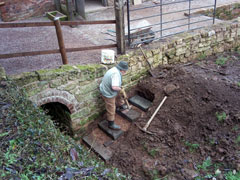 John N seems to be unaware of the cold, happily working in a short sleeved shirt while the rest of us were muffled up in sweaters and jackets.

At one point he was standing in the stream before he worked his way up the bank.

These steps will provide relatively safe access to the stream when the bank is grassed over and are  intended to be out of sight from the planned lawn.

With four people working on it the final re-assembly of the beet shredder went quite quickly. We think that this machine continued to be used, electrically driven, for much  longer than than the other machines and there are certainly signs of wear and tear at a number of places. 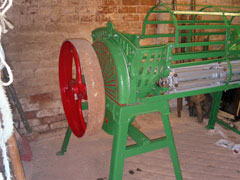 Some of the castings had to have cracks welded up and at least one cast lug is completely missing. None of these things seem to effect the workings of what is basically a very simple machine.

The next step is to connect it to the line shaft with a twisted belt and give it a try. If anyone out there can spare a wheelbarrow load of beets or turnips we could give it a good test.

With another machine virtually complete our thoughts are turning to what to do next. There is an old, probably horse-drawn, reaper binder in the President's Barn that we had a look at this afternoon. Now that would be a challenge.

Go to the next entry after this picking out story