Both days this week have seen work that will affect the front entrance of the watermill. 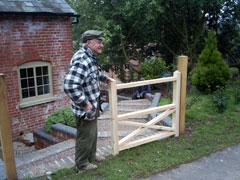 On Tuesday Kim and Jim continued the construction of a pair of gates to go at the top of the front steps. Jim can be seen holding up the first gate for the rest of the team to admire.

Colin and Richard managed to fit a belt from the lineshaft onto the beet shredder. After a short debate it was decided that the shredder would be better displayed if it was parallel to the lineshaft, always assuming that it would fit. 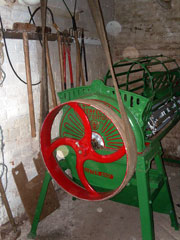 Other team members were drafted in to shift the machine into its final location and the move was soon accomplished.

The belt was from a coil that was found in a barn and is too wide and rather thick but we cut and joined it and tried it out.

With a twist to reverse the rotation it drives the beet shredder without any problems. We ran the waterwheel for quite a while driving just the shredder and no problems came to light.

Tony and Derek both worked on the landscaping in the area between the mill and the church. The ownership of this patch of land is uncertain but nobody seems to complain about us keeping it tidy as long as Derek doesn't cut down any more trees. 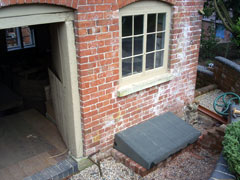 On  Thursday the front entrance area got a bit more attention as Dave and Colin finished off the cover for the light well beside the front door.

This is the last of the items that we received Listed Building Consent to do, and replaces a crumpled piece of corrugated iron sheeting. We think it's an improvement.

Headley and Jonathan did a series of small jobs round the place, mostly involving paint or wood preservative.

John did a bit more pointing but spent most of the day sorting out a bad patch of paving outside the stable block. We think that a water trough stood between the two door of the stable on a slightly raised plinth. Some of the plumbing still exists but has not been connected for a long time and the trough was also long gone. 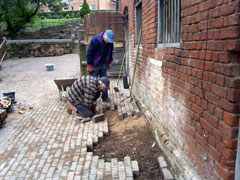 The result of all this is a patch of wall that is badly water damaged, now fixed, and an area of paving with raised bricks and ridges that are a trip hazard.

The offending area of paving came up easily. It was mostly brickwork with a few bits of decayed concrete. Richard and Finton both helped remove the rubbish and some of the excess soil before John and Jonathan made a start on re-laying the bricks. The re-laid paving will follow the line of the footings under the stable wall and will not be completely flat but it will be smooth.

As we were  expecting a visitor in the afternoon we took the opportunity to connect everything to the waterwheel to give it a try. We were able to demonstrate the wheel turning one pair of millstones as well as driving the beet shredder and the chaff cutter. What we need now is a supply of straw, roots and grain so that we can try everything out under load.

Go to the next entry after this front entrance story