Today saw the last of the cast iron repair jobs completed as Headley bolted the last two splints in place on the cracked waterwheel spokes. 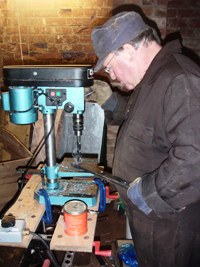 The rain this morning meant that Headley worked under cover, drilling the last of the splints. We chose this method of cast iron repair of the spokes because it was similar to repairs carried out in the past and we felt it would be more in keeping than attempting to weld the cracks. It should also provide greater resilience to shock and vibration than welding would have done. The old cast iron repairs consisted of steel straps laid across the crack and part bolted, part hot riveted in place. Our version is similar but uses all bolted fixings.

Martyn and Dave also kept under cover out of the rain making some complicated looking formwork for the underpinning around the gear pit. Water seepage has to be catered for, of course, as this is what has caused the structure to deteriorate so badly. We are arranging drainage behind the underpinning and through into the gear pit. The pit itself drains into the tailrace by the side of the waterwheel.

By the time Dave had to leave they had constructed one section of formwork ready to put in place, but couldn’t get any further until the expected delivery of reinforcing bars arrived. With impeccable timing the bars arrived a few minutes after Dave had to leave, but they are on site now ready for Thursday.

John declared the day too wet for bricklaying (nobody disagreed), so he and Richard laid out some more footings for the retaining wall beside the main steps and now around the corner to face the farmyard. We spent some time checking levels against other features and even took the trouble to set level pegs in the ground to get the foundations just right. A couple of mixes of concrete were duly poured into the prepared trench and we have yet more footings for John to lay bricks onto. Hopefully the weather will be kind on Thursday so that bricks can be laid without the mortar running away.

One feature of the day only became apparent when the webmaster returned to his den. Late last week a visitor to the web-site had posed a question via the ‘Contact Us’ page asking if we could name the rector of the parish of Shelsley Walsh between 1857 and 1864. As it happens there is a list of all the past rectors of the parish on display in the church so we were able to provide the info. We got the following reply:

Thank you very much for this information. The library recently acquired (as a gift) a small notebook (48 pages) recording the activities of someone who had been curate of Christ Church, Oldbury, [1852] - 1854 and of St. Lawrence, Alvechurch (1854 - 1856), Diocese of Worcester. There is, of course, no name in the notebook to identify this person. The last entries record his arrival at Woodbury Hill Reformatory in July 1856, his institution to the Rectory of Shelsley Walsh on 11 November 1857, his induction on 18 December and his reading in on 27 December. On 25 December he records "Set my new order of Services fairly afloat with the acclamation of the people. The pulpit, desks, & rectory pew, demolished yesterday & the day before, at my expense." Under 1859 one finds "Restored my church." There is nothing else about Shelsley Walsh. Now thanks to your help, I can put a name of this person.


How William Griffith’s notebook came to be in Canada is anybody’s guess but it is nice to be able to add a tiny footnote to its history, even it is nothing to do with the watermill. When the Rev Griffiths was the Rector the mill did not have the current waterwheel and its doubtful if he would have mentioned cast iron repair in his notebook even if it had.