We revealed a bedstone today while hardier team members braved the showers to get some work done outside. 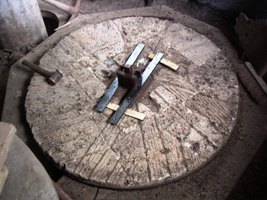 The day started bright and clear but we were expecting showers later and they duly arrived. Max spent the morning completing the brick paving alongside the waterwheel, a task that he managed to complete before the first rain shower arrived. He had only intended to stay until lunchtime anyway so he took the opportunity to return to domestic duties.

John added a few more courses of bricks to the curved wall just above where Max was working. This wall at the side of the wheel pit is also the side of the steps down from the roadway and when these are complete John will have finished all the major construction. The significant bit of that sentence is ‘when these are complete’, because they represent quite a lot of work still to be done.

The waterwheel itself also received attention today as Headley has returned from holiday looking tanned. He picked up where he left off with the fitting of the splints to the cracked spokes. Judging by the muttering and the occasional expletive this task is not proving to be easy. The spokes need to be drilled to enable the splints to be bolted on and it is not easy to get the holes lined up accurately. Slowly but surely though the job is progressing. Having to leave the job to provide extra muscle for Colin and Richard probably didn’t help.

Colin had brought a chain hoist with him today so he and Richard were able to slide the runner stone that they freed up last week aside. We had a bit of a discussion about floor loading before we moved it, but we decided it would be fine, and so it proved. The top picture shows the furrows in the bedstone quite clearly. The iron bars have been wedged under the mace head to help remove it. The second picture is a close up of the shaft after the mace head has been removed and shows how the bearing is held in place with wood and steel wedges.

The whole point of exposing the bedstone was to be able to release the drive shaft so that we could examine the bearings and also assess the extent of the decay in the supporting timbers. There is one timber in particular that supports the drive mechanism that is badly rotted away and will almost certainly have to be replaced, so we will looking for a substantial baulk of oak at some time in the future if we are going to replace like with like.

Admired the bedstone? Click here to see the previous article.