We have a delivery of coping bricks on a hot and sunny working day at Shelsley Watermill. A long term member of the MAC, Brian Dixon, read our appeal for these bricks in the club magazine and got in touch. Today he arrived with a trailer load of blue coping bricks which appear to date from the late 19th Century, absolutely perfect for finishing the wall at the front of the mill that is the same period. Thank you Brian.

We only had a small team today as Colin and Headley were working off-site making more new buckets for the waterwheel. John, Richard, Dave and Max made up the on-site team. Martyn was still in Spain but we think we probably had better weather at Shelsley than he did. The sun shone from a clear blue sky and the birds sang in the trees. Clothing was discreetly loosened as the temperature rose.

John continued to build up the wall above the waterwheel pit once Richard had mixed some mortar for him. This is very routine now and we swing into action as soon as we arrive. First Richard strings out the power cable for the mixer while John collects a supply of bricks. Mortar gets mixed and passed up to John and Richard looks around for the next job. 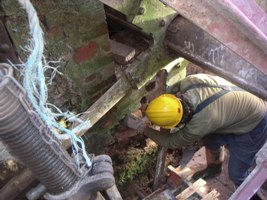 Today the next job was to help unload the coping bricks and then give our benefactor a conducted tour of the mill and the pool. After the tour he went back to his office and left us to return to our tasks. In Richard’s case the task was to make a start on cleaning the old mortar off the donated coping bricks.

Dave spent the day out of the sun inside the waterwheel finishing off the repairs to the brickwork of the mill wall below the wheel shaft. The picture gives some idea of the cramped working conditions in the pit, not helped by the fact that the buckets below where Dave is standing have been cut out so that we had to build up a working platform with pallets. However, Dave has finished the repair, on the outside of the wall at any rate. The same job needs doing on the inside of the same piece of wall, but at least it is dry inside the mill.

Max joined us after lunch and spent the afternoon laying block paving on the platform alongside the waterwheel. By the time he was ready to go home the area he had paved was in deep shadow so no pictures this time around but it does look very good. This is yet another job that is getting close to completion and adds to the feeling that we are really going to have a working mill at some time in the future. 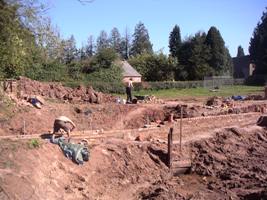 To have a working mill we will need a supply of water so we watch the Court House team with interest. They have been hard at work for many days now dismantling the damaged part of the mill dam and cleaning off the recovered bricks. Now they have started to build back up using the recovered material wherever it will show and new bricks in the core of the wall. They have to find their own coping bricks, though. The picture shows the wall under construction and also gives a good idea of the weather. We have had some discussions and they are hoping to try filling the pool in about three weeks time to check for any leaks or other problems. At this stage they won’t be able to drain it again without our help because they will not have built the control gear for the bottom plug and will have to rely on the mill penstock to get the level low enough to move the bottom plug manually. We are all hoping to have the pool full for the first MAC hillclimb of the season.