The tasks for the day consisted of bucket replacement on the waterwheel, more bricklaying and general site tidying. The team that gathered in the distinctly damp morning air was made up of Colin, John D., Richard, Headley, the other John and Derek. The picture shows the wall under construction on the left and the waterwheel with some new buckets fitted on the right. 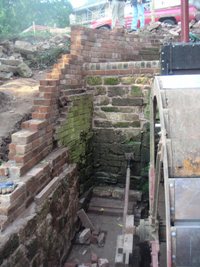 A few of the team had not yet seen the new windows that were delivered last Saturday and stopped to admire them. We had been hoping that these would arrive while the scaffolding was still in place which would have made fitting them much easier but the scaffolding was urgently needed somewhere else. However the windows themselves look very good and have come complete with everything we need to fit and glaze them. We just need to stain the wood to a suitable colour, and we have even been provided with a test piece to show the effect of different stains.

The different members of the team went to their regular tasks with a will. The weather forecast suggested that it would get brighter after lunch, which turned out to be a false hope, but in the meantime brisk work was a way of keeping the damp at bay.

Colin and Headley attacked the bucket replacement on the waterwheel, cutting out several more rusty buckets and back plates and cleaning up the sockets ready for replacements. All the new buckets that we have are now in place so the next step will be to manufacture some more. The intention is for the two of them to do this on Thursday.

Derek lit the bonfire and then tended it for the day, adding brushwood and rubbish from around the site. After several such days the whole place is beginning to look almost cared for. Spring is definitely here and the trees are putting out new shoots and leaves. We will need to keep an eye on the undergrowth to make sure it doesn’t encroach and particularly that nothing puts out the sort of roots that did so much damage to the brickwork.

Brickwork was what occupied both Johns, John D. bricklaying while the other John cleaned off old bricks. The wall that John D. has been working on has now extended nearly half-way along the waterwheel pit and has now reached a point at which we are going to have to make a decision about the treatment of the end of the wall and the steps down towards the farmyard. We think the area at the side of the wheel pit will be a popular viewing point to watch the wheel go round and we will need to arrange for a safe viewing position here.

The last member of the team, Richard, mixed mortar and did a bit of backfilling around the PTO shaft brickwork. Between times he kept a critical eye on the bucket replacement and other jobs and also made mental notes of what could be included on this diary and what was not suitable for publication but good for a laugh anyway.

During the morning we received a text message from our absent leader describing his lunch on a Spanish beach. There were a number of suggestions for a reply, most of which consisted of a single word. In our defence it was cold and gently raining at the moment the text arrived on Colin’s phone, interupting the bucket replacement.