We had a proper inspection of the burr stone bedstone today by someone who actually knew what he was looking at. Tim Booth of the Midland Mills organisation has made a number of visits and given us much advice. 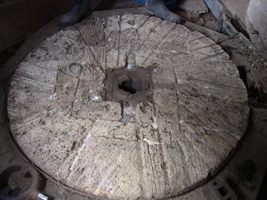 He called today at our request to look at the state of the timber hurst and advise on its repair. On that subject he reassured us that the state is better than it looks and suggested a minimalist approach to the renewal of the timber as long as we get the underpinning around the gear pit right. After delivering this advice he had a look around the stone floor and got quite excited when he saw the bedstone we had uncovered.

We already knew that it was a French burr stone, but he pointed out that it had originally been made as a runner stone that would have been supported by a four arm rigid rynd. The sockets for the rynd have been filled in but two of them can be seen in the picture at twelve o’clock and six o’clock. This type of rynd fell out of use in the middle of the nineteenth century and this millstone must have been quite old by then as it was too worn to still be used as a runner stone. It is quite possible that this stone was imported from France before the French Revolution. The existing furrows are quite coarse and this confirms that the mill was used to produce animal feed rather than flour. Further confirmation that the output was not intended for human consumption is provided by the use of lead to fill a couple of holes in the stone.

While Tim was talking to Colin and Richard the rest of the team got stuck into their tasks for the day. John laid bricks on the footing we prepared on Tuesday. Max also did some bricklaying in the stable barn. There is a strange recess in one wall of the stable that looks like a bricked up window from inside but is quite invisible from outside. At one side of the recess is a doorway and there is only a thin column of rotten bricks between the two. We decided that the best way of securing the column was to brick up the ‘window’ permanently to take the weight of the wall above and then repair the column.

Derek did yet more weeding around the mill, but with the added twist of clearing brick rubble that had accumulated by the new steps. He was helped by Kim for most of the day and between them they had quite an impact on the appearance of the area near the top of the steps. 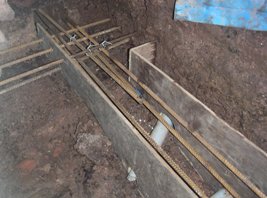 Dave worked in the gear pit, setting the formwork and reinforcing bars in place for the first section on underpinning. This beam goes across the upstream end of the gear pit and has several drains through it to allow the damp to escape. Once Tim had left to visit two other mills we got down to mixing concrete in some quantity. We moved the mixer round to where the sand and aggregate are stored and 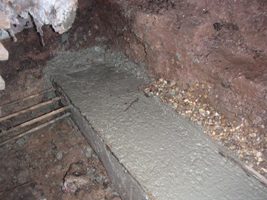 loaded it up. The first barrow load was wheeled to the mill doorway and a bucket chain took it into the pit. Richard stayed by the mixer to get the next load under way. Dave filled the formwork, working in a very confined space. To our surprise it only took two barrow loads to fill the formwork, but it had to be handed down half a bucketful at a time to make the handling easier for Dave.

The space behind the newly cast beam is filled with pea gravel to aid the drainage and there is a length of perforated drain pipe at the bottom to channel the water to the drains through the concrete. All this underpinning is designed to ensure that the hurst stays secure for many more years and supports our French burr stone and its companions. The last thing we want if for this lovely burr stone to come crashing through the floor.