We made a start on restoring the sack hoist today. The day started fine, even sunny, and the regular outdoor jobs got under way but the rain set in at lunchtime and thoughts turned to tasks that don’t involve getting wet. 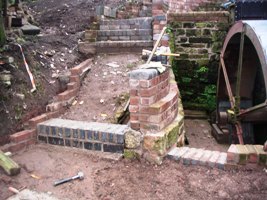 John made the most of the dry morning, completing the bottom step of the flight alongside the waterwheel. Richard did a bit of labouring to help this along and also shifted some soil to level the ground where the steps go down into the waterwheel pit. When that got too much like hard work he switched to applying sealant to the waterwheel buckets and got three more sealed before lunch and the rain put a stop to that job. The sealant won’t stick to wet metal.

Headley put the finishing touches to the splints on the waterwheel and supervised Martyn and Kim as they re-organised the stable barn. The workbench was moved to a better spot under the windows and the vice then bolted to it. We just need some lights and we will be well set up for the winter for working and taking breaks. Last winter we took our breaks in the President’s Barn, an open sided building that could get very draughty, and we are hoping to be a little more comfortable this winter.

As we stopped for lunch the rain started to fall, not heavily but with a persistence that suggested it could go on all afternoon. Thoughts immediately turned to jobs that could be done under cover. This was except for John, who had no choice but to don wet weather gear to finish the step he had almost built. 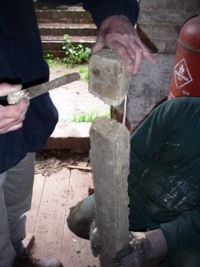 Kim and Martyn descended into the gear pit and removed the shuttering from the concrete we poured last week. We need Dave to tell us what to do next in that area so the two of them moved upstairs to check out what can be tackled there. We have never really worked out exactly how the sack hoist worked, or at least exactly how it was controlled, but we can make a start on restoring or replacing the parts that are obvious. The picture shows a beam that supported one end of the windlass with a piece broken off the end and a pivot pin. This beam is broken in the middle as well as at the end and is well beyond repair so a replacement needs to be made. The beam that supports the other end of the windlass is complete but very worm-eaten and will probably have to be replaced as well. The windlass has not suffered quite so badly from the woodworm but the gear teeth have all but disappeared. Hopefully these can be restored and we won’t have to make a new windlass as well.

Headley and Richard spent some scavenging time rounding up engineering bricks and putting them in the stable barn to dry out ready for john to use in the steps. The steady rain meant that the light was fading early so we made a note of the dimensions of the timber we need for the parts of the sack hoist and called it a day.

Read about the sack hoist? Click here to see the previous article.