We have had the winnower since last August but it has been sitting in a corner while we have got on with other jobs. 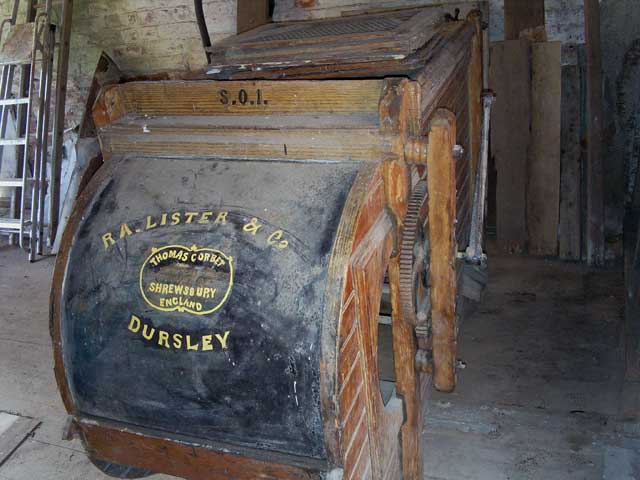 Today John N led the beginnings of some work to re-furbish this old machine.

We have had trouble researching the machine as we were not sure which of the names painted on the cover was actually the maker. What is obvious is that the handle has broken off so we dismantled that part of the mechanism to release the part so that we can repair it.

This in turn gave access to the gear wheel that is just visible on the right of the machine. This turned out to give as a definitive answer to the maker's name.

The picture shows the gear itself in the centre with a close up of each spoke. Cast into the spokes are "T CORBETT", PERSEVERANCE", IRON WORKS" and "SHREWSBURY".

This ties in with the name in the centre of the cover, so we assume that R A Lister, Dursley refers to the distributor or seller of the machine.

Apart from this grain of extra knowledge we can now make a new handle for the winnower and continue the re-furb.

We  are still waiting for a delivery of lime-wash so Max, John and Bob spent their time pointing the brickwork on the outside wall of the stable. The author is reliably informed that this job is just as boring as applying lime-wash. 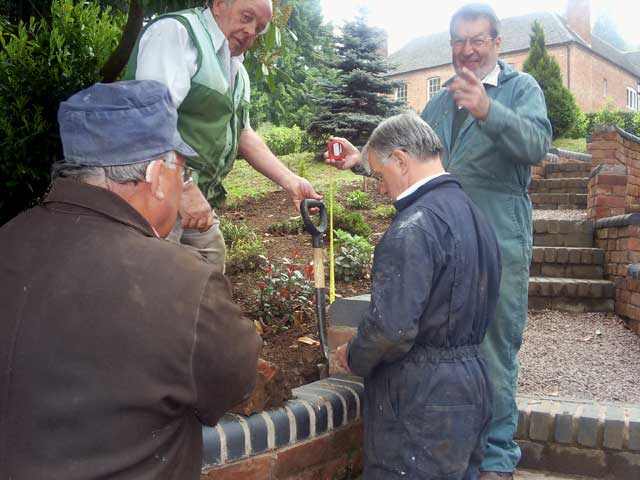 As ever, people switched from job to job, so Dick did a bit with the winnower handle while John N dug some post holes alongside the main steps.

As you can see he had plenty of support and advice!

These steps originally had a handrail and we are going to put a similar rail back, hence the need for post holes.

Martyn is measuring the height to estimate how much timber we need to buy to make the posts to support the rail, Headley is thinking about how to fix the posts in place and Dave is making gestures at the camera.

Richard managed to avoid doing any work yet again, spending most of the morning showing a couple from Teme Valley  Historical Society round the site and then 'supervising' all the other jobs all afternoon.

The weather was dull all day, but it did stay dry, at least until we all left for the day.

Go to the previous entry before this winnower story