Wind and rain marked the 10th May at Shelsley Watermill. The first wet working day for some considerable time didn’t dampen our enthusiasm too much and we made some more progress.

We had a full team in attendance, consisting of Martyn, Colin, John, Headley, Richard, Dave, Max and Derek, and we swiftly settled to our regular tasks with a few variations. 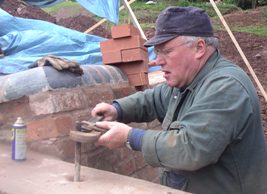 Headley spent part of the day helping the Court House team with some of the heavy metal studs that project from the top of the dam. These used to hold down baulks of timber on top of the wall but the timber has long gone. Before these timbers could be replaced the large square nuts needed to be unscrewed, a job that required a lot of heat, some WD40 and more than a little elbow grease. All but one of the nuts was unscrewed but one stud broke off. It didn't take Headley too long to weld another stud onto the broken stub, so everything is back on track. The rebuilding of the side wall of the pool is now well under way, sheltered by plastic sheeting so that they don’t have to stop work when it rains. The sheeting does the job of keeping the workplace dry but the sound of the wind and rain this afternoon meant that Kev couldn't hear the radio! 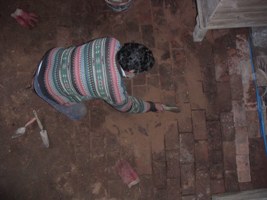 Max wisely decided to work inside away from the wind and rain, finishing off the block flooring. This was the job that was interrupted by the discovery that the inner main bearing support was rotten, and now we have fixed that problem the job could be finished. By early afternoon he had all the blocks in place and was concentrating on getting the sand bedding between the blocks well tamped in. The picture was taken vertically through the hatch from the millstone floor. There are normally wooden steps up to the hatch and it is the traffic up and down the steps which had worn the floor to the point of breaking up.

Over the weeks that we have been working on and around the waterwheel a fair amount of rubbish and detritus has fallen into the wheel pit and the tailrace, along with occasional tools. Most of the tools have been retrieved quickly but the detritus has been left to accumulate. Colin and Dave decided to have a clear out so we turned the wheel so that an opening was at the bottom and the pair of them got to work. After an hour or so it seemed as though the worst of the debris had been removed so Dave left Colin to it and turned his attention to the culvert to see if he could lower the water level in the wheel pit and tailrace. There is certainly scope to lower the water level a few inches but we need to shift a great deal of silt to achieve this. As Dave found, it is not easy working in the confined space of the culvert with its low roof. Much of the problem with silting up of the tailrace is because there is no through flow of water. Once we can run the wheel by water power the silt will be washed away so we tried turning the wheel backwards to stir things up a bit. It certainly moved quite a lot of mud and water around and made a most impressive amount of noise but we will have to wait and see if it has made any difference to the amount of silt in the tailrace! 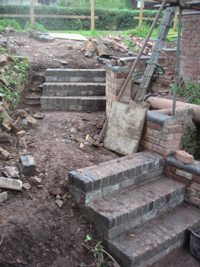 With two flights of steps finished, John tidied up some of the brickwork in the outside wall of the wheel pit where the old and new brickwork meet. On the scaffolding above the wheel and sheltered from the wind and rain, Martyn cut and shaped all the bricks he will need to build an arch above the window. The formwork is already in place, so he will be able to lay all the bricks the next time we get together.

Derek picked up from where he left off last week, generally tidying up and doing some heavy pruning of some of the bushes. He has already got a good sized bonfire stacked up but managed to restrain himself this week and didn’t set fire to it.

Richard did a bit of general labouring, a bit of photography and a lot of loafing around, just like most days. By three o’clock it had become obvious that the wind and rain had set in for the day and we all felt we had achieved enough for one day so we packed up and went in search of creature comforts.

Read about the wind and rain? Click here to see the previous article.