The team had a good demonstration of web power today as well as managing some more progress with the ongoing tasks. It was the select crew today, Martyn, Colin, John, Headley and Richard but Drene, a.k.a. Mrs Colin, had read about the muffins on these pages last week and had sent along a supply of home made rock cakes. It just goes to show the power of the web!

John was pleased with the supply of bricks that Richard had prepared last week and was soon demanding mortar so that he could get on with setting them in place on the steps. He stuck to the task well in spite of the chaos happening around him as the rest of the team milled around. It proves that the steps he is building are a major thoroughfare past the waterwheel. 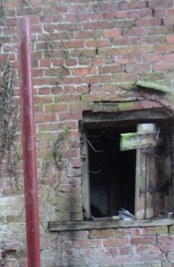 Martyn spent the day preparing to repair the window between the stones, immediately above the wheel. This is the only window opening in the building that does not have a brick arch and doesn’t appear to have any form of lintel either. Rather than insert a timber lintel in a location that is certain to be wet most of the time we have decided to build a brick arch matching the other windows. As well as building the arch we also need to consolidate the wall above the window opening that has developed a bit of a crack, as you can see from the picture. Both jobs need to done from a sound working platform, so another level had to be added to the scaffolding.

When they weren’t helping Martyn, Colin and Headley carried on fitting plates and buckets to the waterwheel. As usual this involves a lot of drilling and hammering and as the amount of new steel in place increases so does the noise level. The original plating was fastened with a combination of bolts and hot rivets but we are using all bolted construction as we rebuild. We decided that heating rivets to red heat and then placing and closing them before they cool was just too much for our skill levels. We may be OK with web power but hot riveting is probably beyond us.

The mill pool has shown a dramatic change over the last few days. The warm weather and the showers of the last few days have produced a prolific crop of weeds covering the muddy bottom of the pool so the expanse of brown is now turning green. The side wall of the pool now has good concrete footings but has yet to rise above that level as the Court House team have been putting their efforts into other areas of that project. The whole area around the Court House is beginning to look much better as the landscaping is rescued from the rampant undergrowth.

This was very much a ‘business as usual’ day and we packed up at the end of the day wondering if web power would deliver more goodies when we meet again on Thursday.