Yet another milestone for this watermill blog to report. After much patient effort by several of the team all the components needed to make the Shelsley Watermill sack hoist work finally came together today. The day was filled with other activities as well. 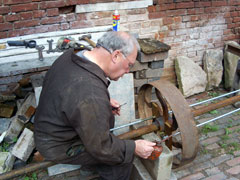 Headley continued the attempt to remove the pulley from the length of donated line shaft.

The problem remains that we cannot remove the taper key holding the pulley in place.

In the latest attempt, Headley drilled and tapped a hole through the key into the shaft and fixed the key to the shaft with an Unbrako set screw.

The idea was to move the pulley along the shaft and leave the key behind. Unbelievably, the Unbrako screw proved to be mis-named, shearing off as the pulley moved taking the key with it.

It looks as though we will have to leave the pulley where it is and cut and join the shaft to get what we want. Very frustrating. 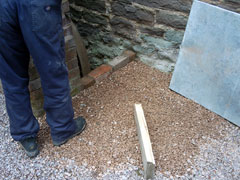 John built a small wall across the end of the PTO pulley pit, tidying up the area by the loft steps.

With the wall built the space behind it was filled with rubble and soil and finished with a layer of gravel. Much tidier than the muddy slope that was there before.

The soil for the backfill came from Max's excavations across the gateway into the farmyard. These are intended to provide a firm ending to the gravelled area where it joins the brick paving instead of the gravel spilling over the bricks. 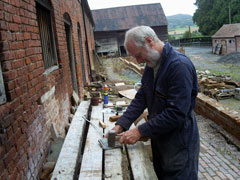 Dick joined in with moving gravel around as well as supervising the fixing of the roller and pulley that he had made for the sack hoist.

Bob got involved in the sack hoist work, making balance weights for the large winding drum. In the interests of recycling he made the weights from recovered lead covered electrical wiring.

We threatened to call these bob weights but decided that was just too corny.

Colin and Richard stripped the old chain from the sack hoist and, once Bob was satisfied with the balance of the winding drum, fixed a new length of chain in place.

The winding drum was loaded with rope that Dick had bought for the purpose and the other end fastened to the windlass. The control ropes were threaded over pulleys and down through the original holes in the floors. We tried the controls from all three floors of the mill. All seemed OK.

We did another test, lifting a small weight while Colin and Bob pedalled the waterwheel round by foot. Again everything worked as it should although the pedallers were surprised by how many turns of the waterwheel it took to lift the load the height of the mill.

Time to try it for real.

It works! Yet again the team goes home with grins on their faces.