Struggles with a tree stump

We spent all day moving a tree stump. A good team was on hand today and some good progress was made but the sheer resilience of the old willow stump was the talking point of the day. 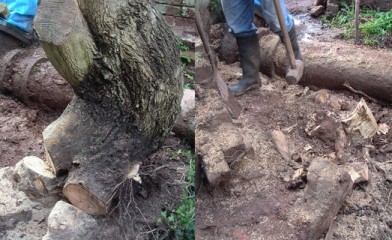 Hedley has freed off the stone nut that has been in place for 80 years. It took two jacks and the application of a lot of heat but the cog has come off its tapering boss at long last. We all knew it had come free because it made quite a thump. Jacking up the cog had lifted one grindstone which returned to its resting position very audibly when the boss came unstuck.

John spent the day bricklaying, again. It seems like I have been writing that for weeks but one thing is certain, when we have the mill ready for visitors it is going to be John’s work that they see first.

Martyn provided an air powered needle gun and compressor so Richard spent a lot of the day chipping rust and lime scale off ironwork. It was very noisy and dusty but satisfying work. There is lots more still to do so maybe this will be Richard’s never-ending job, like John’s bricklaying.

David and Max started the day with the intention of removing the tree stump that overhung the wheel. Just chop through the roots and put a rope around it to haul it out. No chance. No way.

The stump was willow, very twisted and gnarly inside although it didn’t look it from outside. To add to the problems it had grown through and around brick paving and had bricks inside the stump. Finding a buried brick inside a tree when you are using a chainsaw is an unpleasant experience. Apart from anything else it means you have to change the chain on the saw, but I promised David I wouldn’t write about that.

It looked as though the tree stump would survive for another week when John (the builder who is working on the barns, not our John) arrived with some serious tree splitting wedges and a great deal of expertise. With most of us watching he kept splitting the stump until he had got the bricks and stones out and was then able to chainsaw the last bits.

Enough about the tree stump? Look for other posts.