Thursday’s working party expended a lot of effort digging up tree roots. David and Max set to to remove the last of the roots of the willow tree that used to overhang the waterwheel.

The removal of the tree-stump highlighted the lack of support for the sluice box so we have put a temporary beam under it. There is a socket in the wall of the building in exactly the right place for the beam so it seems likely that there was a support here originally.

The damage done by the willow roots over the years is considerable and they must be eliminated before we can start repairing the damage. The more Dave & Max chased the roots the more brickwork fell down! By the end of the day Martyn and Hedley had joined in the fun.

John spent the day bricklaying and hoping that no roots ran under the wall he has almost finished re-building. It is all beginning to look very smart. 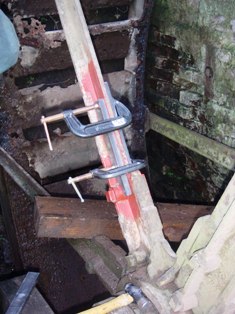 Hedley spent the morning drilling the plates he has made to splint the broken spoke. As you can see from the photo the spoke lines up OK once the plates were clamped on. Drilling through the spoke went slightly easier than some had predicted, which was just as well as the wheel pit was a noisy place to be.

The noise was being made by the air powered needle gun wielded by Richard. Now he has got the hang of it some reasonable progress has been made with about 4% of the wheel now being cleaned up and given a coat of primer. I wish I hadn’t worked out that percentage because it doesn’t look much when it is written down!

Fed up with tree roots? Look for other posts.