The Boss Is Back

The boss is back. Martyn has returned from South Africa rested, refreshed and ready to go. As he had checked this web-site he knew we were waiting for the hand-wheel to finish the sluice box controls. This was duly fitted in place even though he still hasn’t made the handle, which was why he took it home in the first place. Some excuse about waiting for the wood to season, but we think the Stag got in the way.

The team consisted of Martyn (the boss), Colin, Dave, John, Headley and Richard and the weather was wet. Not heavy rain, but enough to ensure that working outside would be uncomfortable. We duly attacked some jobs inside the mill out of the rain. 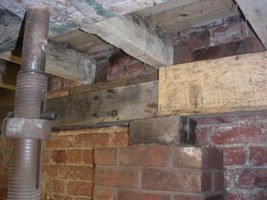 The last diary entry suggested we would take the last two acroprops out today. Wrong! We now have four props in place, having taken a step back and making sure that the floor will be safe for the foreseeable future. The damp penetration through the walls has rotted the floor as well as the joists where the wood touched the walls and we have also realised that there used to be a wooden wall plate set into the wall below the joists. This has completely disappeared leaving a void that we needed to fill.

John and Dave set bricks into this void while Martyn and Richard did the labouring for them. Laying the bricks involved working on tip-toe round the ends of the joists and was the cause of a great deal of language and hilarity. The job got done eventually but the bricklayers insisted that no photos were taken. It will all be hidden behind timber anyway so neatness and precision were not required, but photos were taken when their backs were turned anyway. 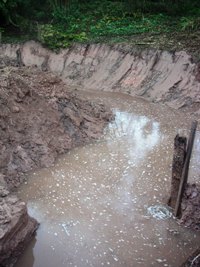 While this was going on Colin and Headley finally anchored the centre-post bearing in place using straps that Headley had made. There seemed to be a certain amount of muttering and occasional hammer blows but the finished job looks good. It got a grunt of approval from the boss, anyway.

There was no activity from the excavator in the mill-pool today but considerable progress has been made. The stream that bypassed the dam has now been redirected down the original route under the brickwork through what appears to be a stone pipe. The inlet must be near to the wooden post that you can see in the photo where the swirl of rubbish is on the surface. There has to be some kind of mechanism for controlling the water level but it is not visible at the moment even if it still exists. Luckily this part of the restoration is being taken care of as part of the Court House project so one less problem for the boss to worry about.

Convinced the boss is back? Click here to see the previous article.