Measure twice cut once. Everybody has heard that old saying, haven’t they? Before we left last Thursday we had started to cut notches into a large beam to go above the door to the ground floor of the mill. We had watched Martyn mark up where the notches needed to be and helped him make the first saw cuts before we all went home. 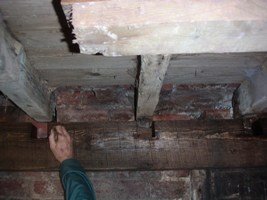 Martyn wasn’t with us today, but Dave, Colin, Derek, Headley and Richard were on site and Colin and Dave had both brought power saws with them. The rest of the notches didn’t take too long to cut out and the beam offered up to the joists. Oh dear, or maybe the words were a little stronger than that.

We had cut the notches on Martyn’s marks but they didn’t line up with the joists. They were too small and in the wrong places. Cutting another eighth of an inch off each notch is much more difficult than cutting the notch in the first place. We will be doing a lot of teasing when Martyn next appears. Measure twice cut once!

The good news is that we have did get the beam to fit eventually and we have now got rid of the acroprops. Well nearly, there is still one but it is not in anybody’s way, tucked away behind the door. We need to complete the last brick pier in that corner up to the height of the beam and then give the mortar time to set. All the timber we have put in has been treated to prevent (we hope) woodworm and rot and we have tried to isolate the timber from any source of damp.

Now we have a clear floor we can think about taking it up and clearing the drains that must run underneath. We have already renewed one drain but we are reasonably certain that there must be another running across the mill and opening into the gear wheel pit. We can see the end of this drain where it ends and it does seem to be blocked but we can’t tell where it runs. Just as well that we will have something to do inside the mill as we are expecting work to start soon on the roof. While that is going on we don’t want to be working outside, hard hats or not! 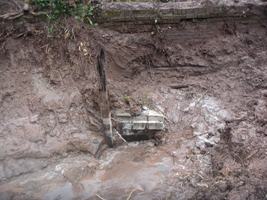 It has been far too wet for any work to be done clearing the mill pool but at least the outlet is now visible. Hopefully the silt that fills most of the pool will dry out a bit and make it easier for the excavator.

In spite of the wet weather, Derek managed to get a good bonfire going and has got rid of more rubbish, including the rotten wood we have cut out. As most forms of rot are caused by fungi, burning the affected bits does help to prevent re-infestation. This doesn’t work with woodworm, of course. By the time a woodworm hole has appeared the woodworm has gone and we need to find another way of preventing damage by these insects. Some of the timber in the mill is so worm-eaten that we are going to have to replace it. We will have plenty of opportunities to measure twice cut once.

Convinced to measure twice cut once? Click here to see the previous article.