The first week of February produced some snow. We all stayed at home on Tuesday but we had got used to the idea of snowy roads by Thursday and a small team gathered to see what we could do. 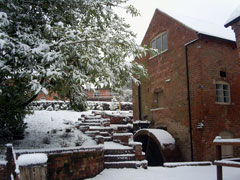 We found pristine snow covering the entire site. It really needed a bit of sunshine to bring out the sparkle but the cloud cover held all morning.

The first task was to get pictures before the snow was sullied with boot prints. The mill looks pretty good with a covering of white, don't you think.

Martyn, Jim and Richard started by moving the latest delivery of timber into the stable. At least this was a task to generate some warmth, even if it didn't take very long.

We then moved inside the mill to put the finishing touches to the new tun, fixing the pivot for the grain shoe and securing the sections of the plinth that supports the tun.

We only need to add the cords to control the grain shoe and we will be able to try grinding some grain. 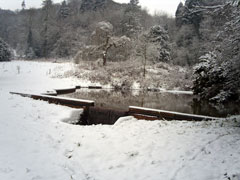 By the time we had sorted that out and settled the tun and its superstructure back into place the snow had started to fall again.

All three of us were feeling the cold so we decided to call it a day, leaving just after mid-day.

The roads proved to be much better than they had been earlier in the day and we parted agreeing to meet again next week.

Go to the next entry after this snow story