Work on the sluice box was the feature of the day this Thursday. While Headley, Colin and Richard worked on that Max finished the middle pier inside the mill and Derek lit a bonfire.

Clearing the bank beside the mill over the last few weeks has produced a large pile of branches, mostly covered with ivy. We tried to burn these on Tuesday, but everything was still very wet and we only managed to produce a lot of smoke.

Derek brought some method to the task and succeeded in getting a good fire going which has disposed of a lot of the rubbish. 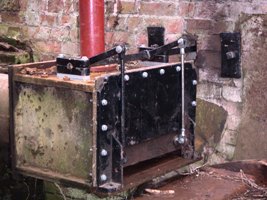 Max quietly got on with the job of building the middle pier on the end wall of the mill. By the end of the day he had built this up to its finished height, so we should be able to insert a beam between the two finished piers and get rid of two acroprops in the fairly near future.

Headley has fabricated the links and other pieces that were missing from the sluice box and with assistance from Colin and Richard he fitted these to the sliding shutter inside the sluice box and bolted on the end plate. We also fitted the control arm and screw inside the mill but we couldn’t quite finish the job because Martyn had taken the control hand-wheel home to make it a handle and not brought it back before he went to South Africa. 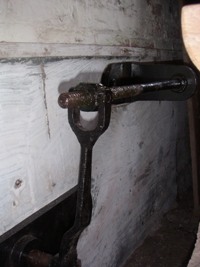 As we had done as much as we could on that task we turned our attention to the bracing of the stack-pipe. This consists of a wrought iron style bracket to fix to the wall, a band to go around the pipe and a rod to join the two. Richard’s height was stretched to the full slipping the band over the top of the pipe and the bracket was offered up to the wall. It remained only to finish the rod to length.

To finish the rod we needed to flatten the end so that it would fit between the ends of the band. Out came the oxy-propane torch for heating and a steel plate made do as an anvil. Just a quick job, we thought, until the gas ran out. Not to be defeated by this setback we moved the jury rigged anvil closer to Derek’s bonfire and resorted to traditional methods, literally putting the iron in the fire.

It took a little while to get the end of the rod to a suitable temperature but it did eventually heat up enough to be hammered into shape. Headley appeared to get great satisfaction from the job, and the rest of us were not about to argue with a man that can swing a hammer like that! Some work with a drill and we were able to erect the brace to check everything fitted before it was all dismantled for painting. All in all it was a good day, one pier finished, the rubbish pile reduced and the sluice box completed.

Read about the sluice box? Click here to see the previous article.