Four members met this Tuesday and worked with a bucket and straw, but not at the same time. Oh, John laid bricks as well.

After last weeks heavy snow, reported as the heaviest snowfall in the area for twenty years, the weather was quite mild for February. The only sign that the snow had been here was a broken branch on the bank by the mill and the mud. The soil was disturbed by last week’s excavations and the melting snow had turned the yard into a quagmire.

There was a mouldy straw bale amongst the rubbish, so we dragged it out with the JCB and unrolled it across the mud. There is an astonishing amount of straw in one of these round bales and we now have a carpet of straw over all the mud. Much easier to walk on and it doesn’t stick to our boots like the mud did.

Once we had done that we did a mix of mortar for John to get on with building the piers inside the mill and Colin and Richard chopped up and removed the broken branch. We tried to build a bonfire, but everything is soaking wet and refused to burn.

At this point Headley arrived with a prototype bucket that he had made while he was supposed to be convalescing. The idea was to check the profile of the bends and the location of the bolt holes. The bends proved to be just right but the bolt holes were slightly out. 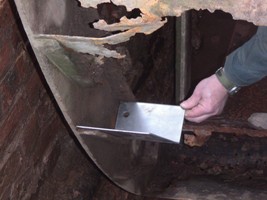 Headley has negotiated a deal for the manufacture of the replacement buckets for the cost of the steel but Headley will have to do all the work. Basically this means Headley gets free use of the equipment needed to cut, drill and bend the buckets to shape. The rest of us think that this is a great deal.

The control gear for the sluice box is now bolted to the wall. Again, Headley had made the necessary bits while he has been at home. He even made a bracket to bolt to the wall for the support brace at the top of the stack pipe. Such is the power of day-time television! People will do almost anything rather than watch.

It started to rain at about four o’clock and we seemed to have had a good day with brick piers, a bucket and straw, so we called it a day and went home.

Enough about bucket and straw? Click here to see the previous article.