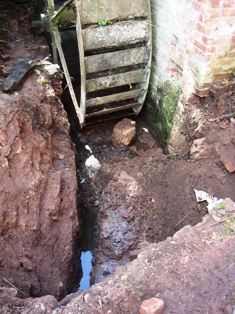 The borrowed JCB has proved a great success and we now have cleared out most of the 1960's backfill of the tailrace.

No sign of the floor of the original tailrace yet, and we have gone as far down as the digger can reach. We have opened a narrow channel to drain the wheel-pit by hand and it looks as though we are going to have to dig the remainder out with buckets and spades. Any volunteers? The channel goes through the side of a culvert to join the stream that drains from the old mill-pools. This culvert was clearly built up in different stages, with the lower parts of the walls being of stone with brick barrel vaulting that looks as though it was added in two or more stages much later. When the mill was in use the culvert was probably an open channel.

An earlier examination of the wheel showed it to be bolted together, and the bolts have gone a little rusty (that's irony for you) but a specially made socket to fit the square nuts has proved to be able to loosen them. This is good news, with 17 bolts in each bucket and 36 buckets to be renewed. Grinding off 612 bolts was going to be hard work with the risk of damaging the cast wheel quadrants.