We planned to remount the downstream millstone pair this month and do a few small jobs. Looking back the month has turned out to be much more productive than we expected. 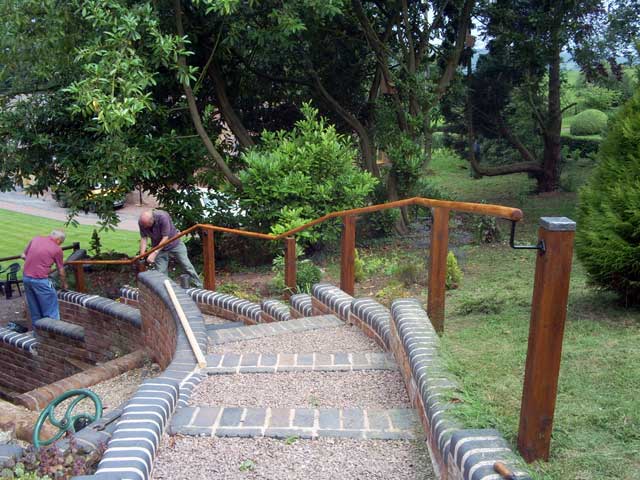 The beginning of the month saw the completion of the handrail alongside the steps past the waterwheel, just in time  for a visit by a group from the Teme Valley Historical Society.

Just in time meant that the paint was still tacky when they arrived! The visit went well and the Donations Box was significantly heavier after they had left.

A lot of small tasks have been tackled during the month, some cosmetic and others more like general maintenance, but everyone has found something to do.A major job was to put the repaired stone spindle back in the downstream millstone. The bearings at both ends of this spindle needed repair off site. With this done it was a relatively simple task to put it back. 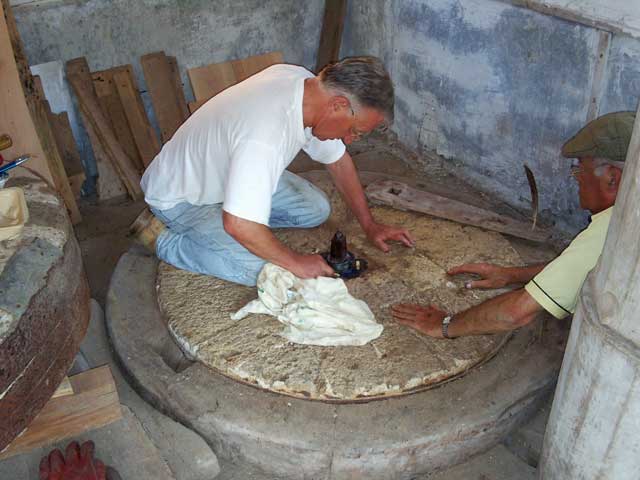 All it took was to lift the spindle that weighs over a hundredweight (50 kilos for our younger readers) into place, threading it through the stone nut on the way.

A certain amount of ingenuity with ropes and a fair amount of effort saw it safely in place. The top bearing in the stone could then be fitted and the whole thing adjusted so that the spindle was exactly square to the surface of the stone. It took more than a single working day to do all this but it should be a long time before it needs doing again.

With the stone spindle back in place we could replace the runner stone and see if it rotated freely, which it did. The  next step was to drop the stone nut, the gear that takes the drive from the great spur gear, into engagement.

Walking the waterwheel round hamster wheel fashion revealed that the the stone turned freely but that some of the wooden cogs in the great spur gear were too big. This hadn't been a problem with only one pair of stones in use as we had eased the centre shaft away from the upstream spindle to get the gears meshing all right. Now we just had to put the problem right. 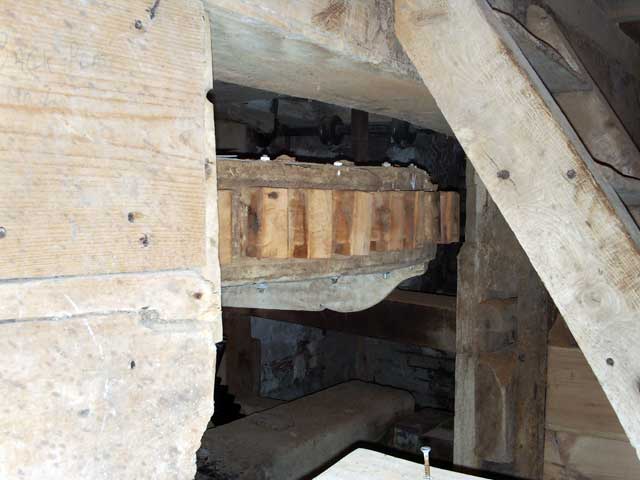 We removed the cover board to expose the spur gear and then set up a simple gauge to check the projection of each wooden cog.

Each cog was planed down at the end until they were all the same length. Even with a power plane it took a complete day to check and trim all sixty four teeth.

Once we had done all the cogs we engaged both stone nuts and walked the waterwheel round to see if we had cured the problem. The centre shaft had to be moved half an inch upstream so that the mesh was the same on both stone nuts. Once we had done this the gears meshed smoothly with both stone nuts at the same time. This might well be the only time we try this out as it normal to use a single pair of stones at a time, never both together.

The downstream millstone pair can now be powered from the waterwheel but we have yet to replace the overhead  drive. Most of the wooden 'furniture' is complete but won't be replaced until we have the overhead shaft back in position.

The watermill was used to prepare grain for animal feed, simply breaking the husks and lightly crushing the insides to make it more digestible. There are other ways of doing the same job, like passing the seed through rollers. 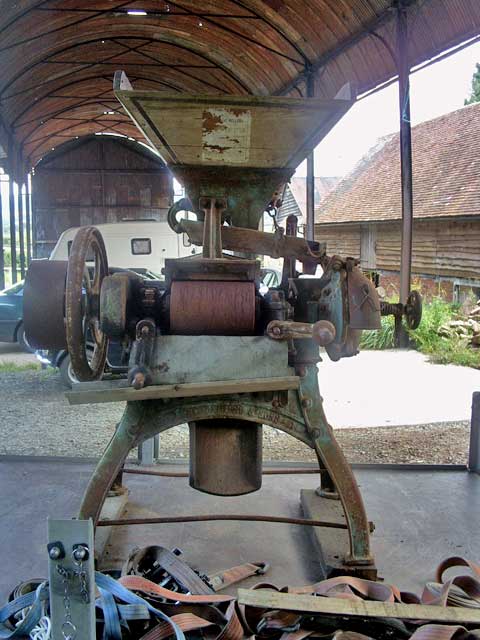 We had been offered an old Bamfords rolling mill some time ago and the team travelled to Cornwall this month to collect it, Dave driving some four hundred and fifty miles with a large trailer in tow. Other team members made a short break of the trip, staying overnight and enjoying the sights.

The mill is pictured as it first arrived at Shelsley Walsh, still on the trailer. It was lifted off the trailer with four Poles, or they may be Lithuanians, whose help we enlisted from the group working on the Court House. We did ask if we could borrow their JCB to do the lifting but they are strong lads and just picked the mill up and slid it off the trailer. It can't weigh much more than half a ton.

The mill spent one weekend in the open sided barn covered with plastic sheet until we could dismantle it into  (slightly) easier to lift sections and move it into the stable.

When restored this machine will be a useful addition to our collection of belt driven machinery as it has both rollers to crush grain and a plate mill, similar to our millstone pairs but made in cast iron, fitted on the end. The wooden hopper still has the painted sign writing on it and the printed instructions pasted to the outside. There is a fair  amount of wear and tear evident but the machine is complete as far as we can tell and should be reasonably easy to bring back into working order.

The same donor also provided a Dennis single cylinder petrol engine that we think will be capable of powering the big lathe. It only took us about an hour to get this running, albeit with a certain amount of profanity until we found the decompression lever.

As you can see, July turned out to be a productive month for the Dibnahs. It has also been a good month for the webmaster, who now has a completely remodelled living room at home as well as proper loft insulation. All this ate into the amount of time and energy available for blogging, so apologies to those who have been missing the regular updates.

Go to the previous entry before this millstone story