Landscaping beside the mill
6th November 2007

The weather was clear and not too cold for the time of year and two of our small team concentrated on the landscaping alongside the mill. At the bottom of the slope John carried on building steps. 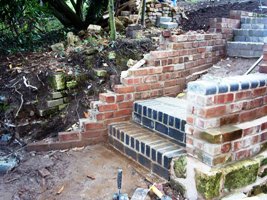 As soon as he arrived John checked the footings that were laid last Thursday while he was away. As ever he was disappointed to find they were not quite level, but he did acknowledge that they were better than the previous attempt. He spent the rest of the day working on the last two steps needed to complete the flight past the waterwheel, finishing one and completing the concrete core of the last one.

Richard spent the early part of the day removing the shuttering from the concrete underpinning that was poured last Thursday. Some of the timber came away without too much of a struggle but the end of the box that was pierced by the reinforcing had to be hacked to pieces before it would come away. The plug in the end of the drainpipe through the concrete also put up a struggle but with Headley on the outside and Richard on the inside it finally came free. The gear pit now drains out into the waterwheel pit again and might be a bit dryer to work in when we set about completing the last section of underpinning still needed. 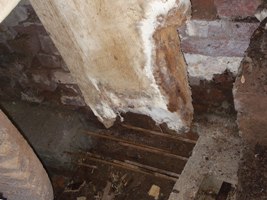 When he wasn’t helping Richard, Headley measured all the walls that will be topped with railings. The object of this exercise is to estimate how much material we need to acquire to make authentic looking railings. The accent is on making the railings look right because there would never have been any railings or fencing round most of the walls with a much more relaxed attitude to safety than is acceptable now. 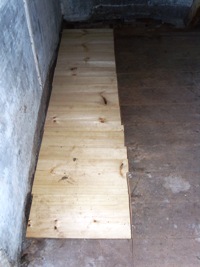 Kim completed the floor-board repair that Dick started last week and then joined Derek working on the slope between the return road and the farmyard alongside the waterwheel. Steady work by Derek over many weeks is making this area look much tidier and has not got to a stage where it actually looks as though it is finished. The wall at the side of the steps has been backed with hardcore and the landscaping has now covered this right up to the wall. The next step has to be to seed the area and at least give the weeds a fight when Spring arrives.

Read about landscaping? Click here to see the previous article.