We mixed a great deal of concrete today and manhandled it into the gear pit to add another section of the underpinning. 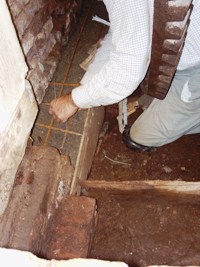 Colin and Martyn mixed concrete and wheeled it to the window over the PTO shaft where it was handed, half a bucket at a time, to Richard who passed it on to Dave. Dave was on his knees in the gear pit with his head and shoulders stuck through the spokes of the gear wheel pushing the mix into place under the outside wall of the mill.

This particular section of underpinning has a complicated arrangement of reinforcing bars, both parallel with wall and at right angles to the wall, extending into the void under the brickwork. The picture gives some impression of how tight Dave’s working space was as well as illustrating the arrangement of the reinforcing.

By continually tamping and prodding the filling, it was forced right under the wall into all the voids and should make the wall much more stable. It was virtually impossible to see into the void we had to fill but it took and awful lot of concrete. Dave kept asking if it was coming out the other side of the wall as he thought he was trying to fill a bottomless pit. Eventually, we had mixed enough to fill all the holes and Dave could emerge and straighten his back! 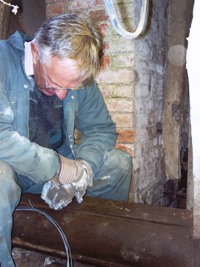 Of course, the project manager had to have a bit of a think about the work before he would let Dave out of the pit.

Colin and Martyn had obviously learnt to enjoy using the cement mixer because they had made too much. John had taken a day off from laying bricks but he had left instruction for the footings for the next section of wall with a suggestion that we might like to pour these in his absence. He did ask that we make them level this time, not like the last lot we poured while he wasn’t looking. The excess mix was dumped in the trench for these footings but it wasn’t enough.

Back to the mixer for another two loads. By the end of the day we had used most of an 800 kilo bag of mixed sand and aggregate, several bags of cement and uncounted buckets of water. We must have hauled the better part of a ton of wet concrete and placed it accurately where it was wanted. There was much talk about easy chairs and glasses of something nice for the evening. 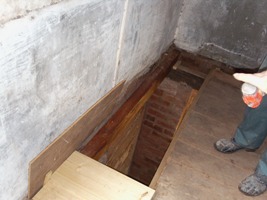 While all this was going on Dick quietly continued inserting the replacement joist that he prepared last week and then replacing the rotted ends of the floorboards. He is cutting them slightly short so that they don’t touch the wall. This way we hope to avoid the decay that is encouraged by the damp penetrating the brickwork. Now we have someone with woodworking skills on the team we keep on seeing woodworking jobs that need doing. The window above the waterwheel needs a shutter because the old one fell apart, for example, and there is a fair amount of work to be done to the windows in the stable barn as well. Dick also restored some of the woodworking tools that were willed to the mill and hope sto restore more of them as time goes on. At least it keeps him away from concrete mixing!

Read about concrete? Click here to see the previous article.