The focus of the team this week was on guards for the moving machinery.

In Victorian times workers were expected to stay out of the moving machinery or at least not to moan too much when a belt tore arm off. This attitude is frowned on now so we have to erect screens to keep visitors and team members out of danger. 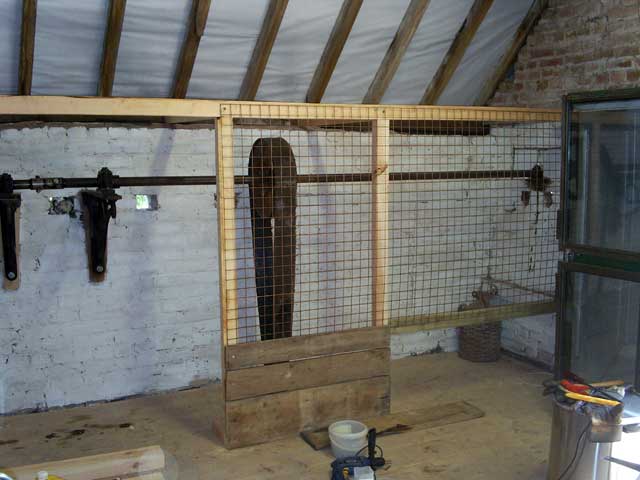 The line shaft in the hayloft is being fenced off with wire mesh on a timber frame. This area is used a the signing-on office for marshals during hill climb events so is well used.

The recently acquired rolling mill is also being included in the safety planning, with a frame built ready to take steel mesh when we have bought some. We will also have to carry out safety work in the mill itself but we haven't started this yet as it needs considerable thought on how to achieve this without spoiling the character or the view of the machinery we are trying to guard.

Not everyone was involved in this and progress was made cleaning up and painting parts for the rolling mill. 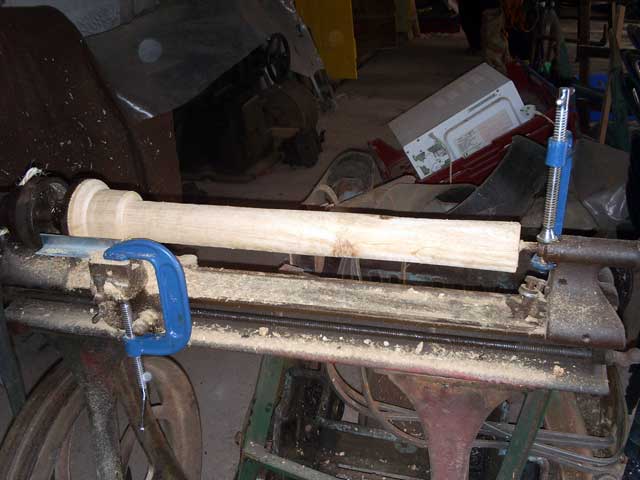 Richard spent both days pedalling at the treadle lathe. The work spent getting the machine into some sort of working order has paid off, and the roller is now almost finished.

The larger diameter part on the left in the picture has to have teeth cut into it to form a ratchet wheel, a job that will have to be done by hand with a fine saw.

The original roller was so worm eaten that it fell apart, but there was enough left to give us a pattern to work from. The original ratchet teeth were slightly uneven but it is going to be a challenge to reproduce. Richard has cut clock wheels before but never anything quite like this.

Go to the previous entry before this guards story