The flooding that followed the heavy rain of July 20th meant that the two man team made a slow start because we spent quite a while looking at the aftermath at Shelsley Watermill.

The mill itself remains little affected by the heavy rain that fell last Friday. There has been some minor damage to the walls of the culvert with some large blocks of tufa stone being swept downstream. The water level in the tailrace is still high so there must be a lot of silt higher up the culvert that will need to be moved, again. 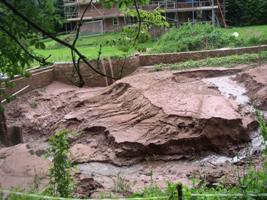 Moving up the valley to the mill-pool presents an amazing sight. The entire pool has been filled with debris washed down from higher up. There is a channel through the mud cut by the stream that is more than six feet deep by the outlet valve. Further up the valley there has been a landslide that has damaged the footpath and the hillclimb track.

There is information about this landslide and its consequences on the MAC website. To leave the staff free to deal with the problem the MAC has asked that people should not phone the MAC office unless it is essential.

Having done a tour of the area Dave and Richard decided to work on the hayloft steps and added a few courses to the side wall. Dave did the bricklaying while Richard did the minimum bit of labouring necessary. With Dave well occupied Richard spent some time doing a detailed sketch of the windows in the east wall of the mill. One surprise was that the large window near ground level was only partly glazed. Examining the frame closely revealed rebates for glass in three panes across the top of the window but the lower part of the frame had no such rebates. There is no visible evidence of shutters either unless they were attached to the brickwork.

The last diary entry ended with tales of thunder and lightning. That turned out to be the start of the heavy rain that fell from Thursday evening until Saturday morning. The resulting flooding was the worst for at least sixty years in many areas.

Enough about the flooding? Click here to see the previous article.